Vincent Van Gogh painted five of his most famous works, the Sunflower series, from August 1888 to January 1889 when he was living in Arles in the South of France. Each of the paintings depict a bouquet of sunflowers in a vase using three shades of yellow (there’s blue in the backgrounds and in some accents). This was a deliberate choice by the artist, his attempt to convey the vibrancy and variety of the flower with the color most characteristic of it. He also used thick, layered brushstrokes, a bold impasto that captured the dimension of the sunflower head and seeds as well as their color.

Van Gogh had explored sunflowers before. When he lived in Paris with his brother Theo in 1887, he painted a series of still lifes of sunflowers, two to four cut blooms withering on the floor. They were very different in palette and mood to the bright bouquets of the Arles works. In a letter from August of 1888, Vincent wrote to his brother that he’d returned to the subject with a new approach:

“I am hard at it, painting with the enthusiasm of a Marseillais eating bouillabaisse, which won’t surprise you when it’s a question of painting large sunflowers. […]

Next door to your shop, in the restaurant, as you know, there’s such a beautiful decoration of flowers there; I still remember the big sunflower in the window. Well, if I carry out this plan there’ll be a dozen or so panels. The whole thing will therefore be a symphony in blue and yellow. I work on it all these mornings, from sunrise. Because the flowers wilt quickly and it’s a matter of doing the whole thing in one go”

The new series of sunflowers was meant to be as welcoming and warm as the one he fondly recalled from the shop next door. Van Gogh was expecting a guest in a few months, his friend and fellow painter Paul Gauguin. He had an idea that they might live and work together sharing a studio, a studio that would be decorated entirely with sunflowers, hence his plan for a dozen paintings in the series. He never got that far, nor did the two artists get a studio together, but Gaugin did come to visit him in the aptly named Yellow House at Arles, and Van Gogh hung two of the sunflower paintings on the walls of his room. 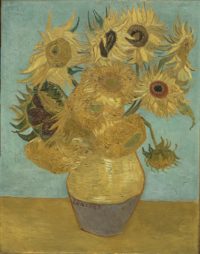 Paul loved them so much he point-blank asked Van Gogh if he could keep one. Vincent wanted to make his friend happy — they had fought during Gaugin’s stay and he left earlier than planned on a rancorous note — but he was so desperately strapped for cash and so concerned that Theo, who was engaged to be married, have some money to make a home for his new bride, that Paul’s request put him in an awkward position. He wrote to Theo that he would let Gaugin have one of the sunflowers and redo it so Theo could exhibit it and perhaps sell it.

You’ll see that these canvases will catch the eye. But I’d advise you to keep them for yourself, for the privacy of your wife and yourself.

It’s a type of painting that changes its aspect a little, which grows in richness the more you look at it. Besides, you know that Gauguin likes them extraordinarily. He said to me about them, among other things:

You know that Jeannin has the peony, Quost has the hollyhock, but I have the sunflower, in a way.

He didn’t know how right he was. His Arles Sunflowers are now in top museums on three continents: The National Gallery, London, the Van Gogh Museum in Amsterdam, the Neue Pinakothek in Munich, the Philadelphia Museum of Art and the Seiji Togo Memorial Museum of Art in Tokyo. The five will be reunited for the first time in virtual space on August 14th in a Facebook Live event. Curators from each museum will speak for 15 minutes about the paintings in a globe-trotting relay dedicated to Van Gogh’s iconic Sunflowers.

This video from the National Gallery gives a brief introduction to the paintings and the #SunflowersLive event:

The Van Gogh Museum, meanwhile, has created a virtual tour of the Sunflowers so you can explore them at your leisure accompanied by Willem van Gogh, great-grandson of Theo van Gogh. They’re also the only one of the museums to have a fully zoomable high resolution image of their Sunflowers painting on their website (see the link above). You can get way, way up in the details of the work, and you can’t put a price on that especially with an artist like Van Gogh whose brushstrokes are so meaningful.