The remains of the Tudor-era palace have been discovered under the floor of the Painted Hall at the Old Royal Naval College in Greenwich, England. The crew was working on an ambitious project to restore the King William Undercroft of the hall and reveal English Baroque architecture designed by Christopher Wren and Nicholas Hawksmoor that was covered up more than a hundred years ago when they found the remains of two rooms from Greenwich Palace. One has a rare surviving stretch of lead-glazed tile flooring.

Being set back from the river, these are likely to be from the service range, possibly where the kitchens, bakehouse, brewhouse and laundry were.

One of the rooms was clearly subterranean and contains a series of unusual niches, which archaeologists believe may be ‘bee boles’ for the keeping of skeps (hive baskets) during the winter months when the bee colonies are hibernating. Bee boles have occasionally been found in historic garden walls, but it is very rare to find them internally, making this find even more significant. The niches were probably used for keeping food and drink cool in the summer months when the skeps were outside.

The first palatial structure on the site was built by Humphrey, Duke of Gloucester, youngest son of Henry IV, brother of Henry V and uncle of Henry VI. Appointed Lord Protector upon his brother’s death, he largely ruled the country while his nephew was a small child and was even Regent, albeit a contested one, after the death of his elder brother. In 1433 he had a palace he named Bella Court built on the south bank of the Thames just downstream from London. 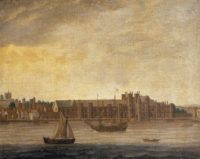 When he was accused of treason by his enemy, Queen Margaret of Anjou, and died in jail in 1447, she took Bella Court and renamed it the Palace of Placentia (from the Latin for pleasantness). From then on, it was the monarch’s playground and a highly popular one at that. Nestled in the bucolic splendor of Greenwich Park, it was a quick boat ride from Whitehall Palace and Hampton Court Palace, the primary London palaces of the Tudor monarchs. It offered all the clean air and verdant beauties of the country with all the advantages of easy proximity to the metropolitan heartbeat of London.

King Henry VII rebuilt and expanded the palace, and Henry VIII, never one to be outdone when it came to lavish spending on his personal luxuries, turned into one of the most glamorous palaces in the country, on a par with Hampton Court Palace. Henry VIII was born in the Palace of Placentia, so he had a particular affection for it. The future Queen Mary I was also born there. So was the future Queen Elizabeth I. Her mother Anne Boleyn was arrested there before being taken by barge to the Tower of London. Henry’s much longed-for but ultimately sickly and ineffectual male heir Edward VI died there.

Elizabeth I spent many a summer at Greenwich Palace and several events of momentous import in her reign took place there, including the parade of booty captured from the Spanish Armada, a performance by William Shakespeare, her knighting of Sir Francis Drake and, according to an almost certainly apocryphal tale, Sir Walter Raleigh’s chivalric act of covering a puddle with his cape so the Queen would not soil her dainty regal feet.

The Stuart monarchs weren’t as fond of Greenwich Palace as the Tudors had been, but it was still one of the most frequented palaces thanks to its prime location. Placentia was eclipsed when the Queen’s House was built nearby on the Greenwich Park grounds. Commissioned by Anne of Denmark, wife of King James I, Queen’s House was built between 1616 and 1635 by architect Inigo Jones, his first big royal job and the first palace built entirely in the classical style Jones would become famous for.

As with so many buildings associated with the British monarchy, aristocracy and church, the Palace of Placentia declined precipitously during the Civil War and Commonwealth. Cromwell tried to sell it at first, as he had sold off so many royal possessions. In 1652 the House of Commons authorized its sale to defray the Navy’s expenses. They ordered the palace, park and all associated lands be surveyed and their value assessed, but while the survey did take place, there is no record of the sale attempt going any further. Always practical minded, Cromwell converted the palace into a biscuit factory. Later he used it as a prisoner of war camp.

Come the Restoration in 1660, King Charles II decided to call time on the one glorious Palace of Placentia, by now so dilapidated it was beyond repair. He ordered it demolished and a new even grander palace built in its place. The expansive luxury compound he envisioned was never finished. His successors William and Mary had no interest in picking up where he left off. In 1685 they gave Charles’ unfinished nub of palace, a chunk of the grounds and other structures to Sir John Sommers with the intent that he use the estate to build the new Royal Hospital for Seamen, which he did.

And so Greenwich Palace became the Naval Hospital and then the Old Royal Naval College. When the restoration of the undercroft and elaborately painted ceiling after which the Painted Hall is named is complete in 2019, the hall will be the new visitor center for the Old Royal Naval College. The ORNC is hoping to include the newly discovered Tudor remains in the new visitor center, but that will require more money, and they’re still £2 million short of the total they need to complete the Painted Hall Project as it is. I’m sure they’ll find a way. How many more kings and queens had to have been born and died there before they can scrounge up the cash to preserve some of the only surviving remains of Greenwich Palace?