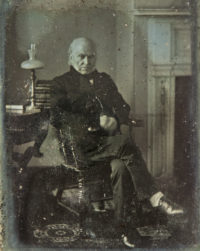 A daguerreotype portrait of John Quincy Adams taken in March of 1843 by Philip Haas, the earliest surviving original photographic image of a US president, has been rediscovered after more than a century and a half of languishing in obscurity. It is going up for auction at Sotheby’s Photographs sale on October 5th in New York. This silver plate portrait has been in the family of Horace Everett, a congressman from Vermont who served in the House of Representatives from 1829 to 1843, since Adams gifted it to him in 1843, but the seller, a descendant who wishes to remain unnamed, thought it was a portrait of Horace Everett and had no idea that an object of national significance was stashed amidst his attic clutter.

Claims of historical precedence tend to come with caveats and asterisks, and it must be noted that the daguerreotype, a so-called half plate measuring about 5 inches by 4 inches, is not, technically, the earliest photographic image of an American president.

That honor, if few others, belongs to William Henry Harrison, who had his likeness taken in 1841, around the time of his inauguration. He died of an uncertain illness 32 days into his term, and the original daguerreotype is not known to survive, though the Metropolitan Museum of Art owns a copy, made by the Boston firm Southworth and Hawes around 1850. And Adams himself was first photographed in 1842, by the Boston photographer John Plumbe Jr., though the images appear to be lost.

With the earlier pictures surviving only in later reproductions, that makes this daguerreotype the oldest known original image of a US president. (Until someone reads the headlines, is inspired to dig through grandpa’s junk and finds the William Henry Harrison portrait.)

The son of second President of the United States John Adams and his redoubtable wife Abigail, John Quincy Adams ably filled his father’s very large footsteps, carving out an exceptional career as a diplomat and politician. He started out with a bang as a US Minister to the Netherlands under President George Washington. Other high ranking diplomatic posts followed, in between which he held his first high elected office as a Senator from Massachusetts (1803-1808). He was President James Monroe’s Secretary of State from 1817 to 1825 — it was Adams who actually crafted the Monroe Doctrine, not Monroe — and then succeeded him to the highest office in the land when he was elected the sixth President of the United States (1825-1829).

After his loss to Andrew Jackson in the 1829 presidential election, despondent by the ugliness of the campaign and devastated by the suicide of his son, Adams contemplated retirement. Within two years he was back in the public service game. John Adams had been a one-term president, after all, the first one. John Quincy was the second, so he was still very much following in his footsteps. Between 1831 and 1848 he was repeatedly elected to the US House of Representatives from Massachusetts.

Horace Everett’s time in Congress overlapped with John Quincy Adams’. The two men were politically aligned and personal friends. Everett happened to be at Haas’ studio when the former president sat for the portrait. Adams had interrupted Everett’s sitting, in fact, which is why Adams gave him the signed plate as a gift since he’d been witness to its conception and had graciously allowed him to cut the line.

A patchwork of labels on the back of the newly discovered daguerreotype, which is in a simple ebonized wood frame, attests to that personal connection. There’s a piece of brown paper, apparently clipped from an envelope, with “J.Q. Adams” in the return address space, in what appears to be the former president’s handwriting. “He had a distinctive way of making his H’s,” Ms. Bierman said.

There’s also a bookplate with the Everett family crest, on which someone else wrote “Presented by J.Q.A. to his Kinsman H.E. 1843,” and noted that it was said to be “one of the earliest daguerreotypes.”

That was a bit of an overstatement. Louis Daguerre released his process of fixing images onto metal plates in August of 1839 and American photographers were experimenting with his system within months.

It wasn’t even one of the earliest daguerreotype portraits. Hell, it wasn’t even one of earliest daguerreotype portraits Philip Haas made of John Quincy Adams. This plate was the product of Adams’ second portrait shoot with Philip Haas. The first one had taken place a week earlier. In his diary entry for March 8th, 1843, John Quincy Adams recorded with wonderment his impressions of the technology.

I walked this morning to Mr Haas’ shop, and he took from his camera obscura there Daguerrotype likeness of me. The operation is performed in half a minute, but is yet altogether incomprehensible to me. Mr Haas says it is a chemical process upon mercury, silver, gold and Iodine. It would seem as easy to stamp a fixed portrait from the reflection of a mirror; but how wonderful would that reflection itself be, if we were not familiarized to it from childhood.

He returned for a follow-up shoot on March 16th. From his diary entry from that day:

According to promises I walked up to Mr Haas’s shop about 9. my hands in woolen lined gloves bitterly pinched with cold. Found Horace Everett there for the same purpose of being facsimileed. Haas took him once, and then with his confront took me three times – the second of which he said was very good – for the operation is delicate: subject to many imperceptible accidents, and fails at least twice out of three times.

The daguerreotype is estimated to sell for $150,000–250,000, but it’s likely to go for much more than that due its illustrious subject, uniqueness and historical significance.