A stone long believed to be a medieval artifact associated with the Templar Knights has been revealed to be older, cooler and to bear no relation to the military order of monks. The stone is one three long burial slabs with faint carvings on the surface that now reside outside the Inchinnan Parish Church in Renfrewshire, Scotland, next to a group of 10 slabs known as the Templar Stones. Originally located in the kirkyard of the defunct All Hallows Church, a Templar church in the 12th century, the stones were believed to date from around that time and the carvings to something mysteriously Templar-related.

The Templar Knights have long been associated with secrets and mysteries — strange rituals, intrigues and depravities, and lots and lots of money. Founded in 1119, the Knights Templar gained great renown as crusaders, but the vast majority of them never picked up a weapon. A bookkeeping ledger was more their speed and they built a banking business that counted the highest authorities secular and ecclesiastical as clients. That’s all fine and dandy when you’re winning battles, carousing unsupervised and reputedly engaging in occult and mysterious initiation rituals. Not so much when you look like God has forsaken you because you lost the Holy Land. That’s when the order became a target for a very crowned, very truculent, very determined enemies who happened to be in debt to them up to their eyeballs. The Templars had accumulated so much wealth and power in the world of high finance that in 1307, seeing an opening in the escalating rumors of weird initiation rites, King Philip IV of France arrested, tortured and executed all the Templars he could find. He also confiscated their ample stuff and prevailed upon the Pope to officially disband the order. This is how kings get their enormous debts written off.

All Hallows Church continued on after the demise of its founding order in different hands. The church was rebuilt repeatedly, the last time in the early 20th century, and the burial stones remained in place. It was only in 1965 when the last All Hallows was demolished to make room for the runway tarmac of Glasgow Airport that the Templar Stones were moved to the nearby Inchinnan Parish Church where they still abide 50+ years later.

It was this connection to All Hallows Church that inspired the discovery that at least one of the engraved stones was not what people had thought it was. Digital graphic recreation experts Spectrum Heritage, in collaboration with the Inchinnan Historical Interest Group (IHIG), have been working on a creating a digital 3D reconstruction of the last All Hallows. They sifted through archives, records, blueprints, old artworks, photographs, anything that might give them some data to create an accurate model. As part of the project, IHIG arranged for a community archaeology dig manned by volunteers from seniors to children to excavate the site of the former All Hallows.

Before it was a grassy patch underneath the flight path of jets, the site of the long-gone All Hallows Church was the location of earlier religious structures itself. The Inchinnan Old Parish Church was built there in early Middle Ages and dedicated to St. Conval, founder a monastery believed to have been established in the area around 600 A.D. and whose body said to have been buried in the church.

As a part of the ‘St Conval to All Hallows’ community archaeology project, Clara Molina Sanchez (Spectrum Heritage) has been using a technique called Reflectance Transformation Imaging (RTI) on the burial stones to bring out the worn detail which is no longer visible to the naked eye. Megan Kasten (a PhD student from the University of Glasgow) has been studying the many carved stones at Govan Old church and wanted to compare these with the stones at Inchinnan. Earlier this month she examined the 3D models from Inchinnan closely and to her surprise noticed that one stone had a cross on the top third of the stone and faint panels of interlace. […]

This discovery adds to the existing three large carved stones decorated with crosses, carved animals and interlace that are characteristic of a group of sculpture that is typically referred to as the ‘Govan School’ of carving. These stones date to the 9th to 12th century when All Hallows, along with Govan and Dumbarton Rock, were places of burial for the elite of the Kingdom of Strathclyde. […] 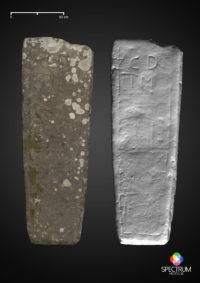 All the stones have decorations and/or inscriptions, which are generally not visible to the naked eye. To make these carvings visible, two different digital documentation techniques were used. Firstly, photogrammetry was used to accurately capture the shape of the stones. In this case, the colour of the biological growth makes it harder to see the details on the surface, but, by ‘deactivating’ it, the different carvings of swords, crosses and inscriptions can now be seen.

The second technique, RTI (Reflectance Transformation Imaging) is a multi-image technique that provides very detailed information on the surface of a material. RTI files allow the user to explore the surface of the material virtually with different lighting conditions. In this case, a Virtual RTI was created from the photogrammetric models. And to do that, a digital dome made up of 93 lights was placed over the 3D models, thus creating an image for every light. These images were processed, which in turn produced an RTI file for each one of the stones. This made it possible to obtain information about the stones’ decorations that can also complement the photogrammetry itself. The combination of both techniques has been proven to be a very valuable tool to unveil details of the surface invisible otherwise to the naked eye.

There is very little material in the archaeological or historical record about the Kingdom of Strathclyde. Any information we can glean from new technology to recover knowledge lost, eroded by time and the elements, will make it possible to paint a broader, more accurate historical picture of this little known period.