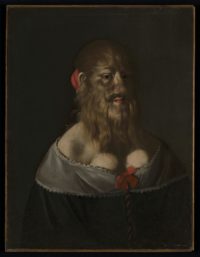 The Wellcome Collection, the free museum and library founded by pharmacist and medicalia collector Sir Henry Wellcome is surely one of the most wide-ranging, fascinating and vibrant museums in London. It has just added another gem to the millions: an oil painting of Barbara van Beck, a 17th century artist and business woman who made a splash in European and British high society thanks to her talent, grace and hairiness, largely the last of these.

Van Beck had hypertrichosis or Ambras syndrome, a genetic condition that cause thick hair growth in places where it doesn’t normally grow on humans. Barbara’s long, silky chestnut hair covered her face, from forehead to nose to chin. Combined with her fine figure and excellence on the harpsichord, her concerts and performances were a big draw, attended in theaters and drawing rooms instead of the dingy carnival sideshows “bearded women” would be relegated to in later centuries. Her condition made her stand out — people loved to see her the juxtaposition of biological oddity, fashion plate and accomplished lady — but it was her ability to perform artistically as well as socially that garnered her such appreciative and well-heeled audiences.

Diarist John Evelyn records attending one such performance in London in his entry of September 15, 1657:

I saw the hairy woman, twenty years old, whom I had before seen when a child. She was born at Augsburg, in Germany.
Her very eyebrows were combed upward, and all her forehead as thick and even as grows on any woman’s head, neatly dressed ; a very long lock of hair out of each ear; she had also a most prolix beard, and moustachios, with long locks growing on the middle of her nose, like an Iceland dog exactly, the color of a bright brown, fine as well-dressed flax. She was now married, and told me she had one child that was not hairy, nor were any of her parents, or relations. She was very well shaped, and played well on the harpsichord. 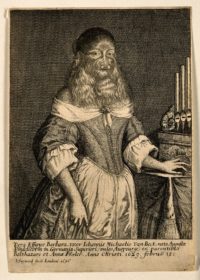 She worked consistently for decades, was a bona fide celebrity and widely depicted even long after her death. The Wellcome has five prints of van Beck already in its collection. Engraver Richard Gaywood’s 1656 portrait of her standing by a harpsichord, her hands posed delicately on the keys, was widely circulated and copied by later artists. The newly acquired oil painting predates Gaywood’s engraving by 10 years or so. It is the first painting of van Beck in the Wellcome Collection and is of very high quality.

“We don’t know who painted the portrait, or where, when or for whom, but the point of it is Barbara’s dignity,” Angela McShane, Wellcome’s research development manager, said. “This is a beautifully executed high-status painting. She is not portrayed as a freak as the Victorians would have described her – as I often say when lecturing, you can blame the Victorians for most things – but as a woman with great self-possession and presence, painted at a time when she would have been viewed, as Evelyn saw her, as wonderful, a natural wonder.”

“There is nothing titillating about her low-cut dress either, though we might now see it that way. She is dressed is in the highest fashion of the day and contemporary viewers would have recognised that.”

That is a tribute to her gifts and perseverance. Her life could have easily taken a very different path. Barbara van Beck was born Barbara Ursler in Augsburg, Bavaria, in 1629. As Evelyn alludes to, by the time she was eight years old her parents were exhibiting her in traveling shows, but either did not neglect her education or she used her wits to get one herself by whatever means were on offer. As an adult she was highly cultured, spoke several languages and had traveled extensively.

It was also fortunate timing. Given how people with such visible conditions were often treated before and after her (called demons, ostracized, made to live in squalor, put on display like zoo animals from cradle to coffin), Barbara van Beck was lucky to have been born during a window of time starting in the late 16th century when monarchs, aristocrats and high society developed a keen interest in anomalous configurations of the human body. It was part of the cabinet of curiosities ethos, collecting oddities of biology, minerology, archaeology, geology. If it was deemed exotic, some king wanted to display it. Indeed, it is eminently possible that the oil painting of van Beck was commissioned for one of those aristocratic collections, perhaps even the most famous of them all.

[The condition] was named for Ambras castle in Innsbruck, where Ferdinand II, the archduke of Austria, had created a famous cabinet of curiosities – still open to the public – which included portraits of people with unusual medical conditions such as hirsutism. The portrait of Van Beck is of such high quality that McShane wonders if it could have been in the collection at some point after Ferdinand’s death.

“We know nothing of Barbara’s life after that meeting in London. She disappears from history. There is no reason why she wouldn’t have had a normal lifespan. If you survived to 10 years old, you were highly likely to make it to 60. There must be more records of her out there somewhere, a research project waiting for somebody.”

The portrait is not yet on display. It needs some love of the cleaning and conservation type which the Wellcome Collection staff are currently giving it. The plan is for the work to go on public display early this year. It will also be a featured player at the Culture of Beauty conference at the Wellcome later in 2018.