Robert Warren, Executive Director of the Hoyt Sherman Place gallery in Des Moines, Iowa, was looking for some Civil War flags in a flower closet. He didn’t find any. Instead, wedged between a table and the wall, he found a late 16th century panel painting by Dutch master Otto van Veen. It had suffered significant water damage after spending who knows how long in a small, uninsultated room full of jumbled stuff, and before then experienced unfortunate attempts at restoration. It was also unsigned.

The scene depicts the figures of Apollo and Venus accompanied by her son Cupid. Venus, the Roman Goddess of Love, Beauty, and Fertility, is portrayed as an artist painting a landscape that includes a small image of Pegasus on the horizon. Apollo, holding a lyre, is the Roman God of Music, Poetry, and more. Cupid is the Roman God of Desire, Affection, and Erotic Love. The painting also contains four still-lifes referencing Venus’ beauty and fertility: a collection of jewelry, a basket of fruit and flowers, a sprig of roses, and a bowl of oysters. A fifth still-life of her painting supplies occupies the lower right corner.

The painting was coated with layers of discolored varnish and former restoration work that flattened the three-dimensional quality of the scene and falsified the artist’s intended palette. Areas of former loss were present along splits in the wood and throughout scattered areas especially pronounced in the left third of the painting. The surface was heavily overpainted after a succession of former restoration attempts.

Chicago conservator Barry Bauman conserved the piece, cleaning it, repairing flaking paint and faulty restorations. The artist was identified as Otto van Veen who painted it in Antwerp in the last years of the 16th century. It was brought to Des Moines by the Collins family who had owned it since at least the 1880s when they lived in New York and loaned it to the Metropolitan Museum of Art. The painting moved to Des Moines with them and the family donated it to the Hoyt Sherman Place gallery in the 1923. It is Des Moines’ earliest Old Master painting.

Born in Leiden to a prominent Catholic family, van Veen studied in Rome and built a successful studio in Antwerp where he received numerous commissions for altar pieces and other religious themed works from churches and aristocratic patrons. He also took in students, most famously Peter Paul Rubens who studied under van Veen from 1594 to 1600, just the time when he painted Apollo and Daphne. A humanist and scholar, van Veen would go on to publish three emblem books (illustrated compendia of symbols and allegories used in art accompanied by a motto from a famous author, usually from antiquity). His most popular by far was Amorum emblemata (published in 1608), which is replete with Cupids.

So even though Apollo and Venus might seem to lean towards the profane for someone with a thriving business painting Christian iconography, in fact it fits his education, understanding and pedagogical approach to perfection. There are so many symbols of love layered in the panel it would have made a very useful addition to the Amorum emblemata.

All those layers may be the reason the masterpiece was hidden away in the storage closet. When it was donated to the gallery, the Hoyt Sherman Place was run by the upstanding ladies of the Des Moines Women’s Club. They founded the Club in 1885 with the express purpose of creating an art museum open to the public free of charge. After more than two decades of hosting temporary exhibitions at various sites, in 1907 the DMWC finally found a permanent home when the city rented them the historic Hoyt Sherman Place for the token sum of $1 a year. The Club built an addition to house its art collection and the Hoyt Sherman Place gallery opened as the first public art gallery in Des Moines. 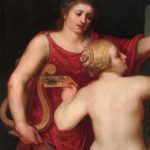 In 1921 construction began on another addition that would expand the gallery and create an elegant auditorium for performances and exhibitions. The closet where Warren discovered the Van Veen’s masterpiece is located on the balcony of the auditorium. He speculates that all the nudity, sex and fertility symbols were a little too spicy for the Des Moines Women’s Club when it was donated in the 1920s. At that time, there wasn’t a single nude in the 54-work collection.

Apollo and Venus debuted at the gallery in a preview last month. It will be displayed as part of the permanent collection this summer. 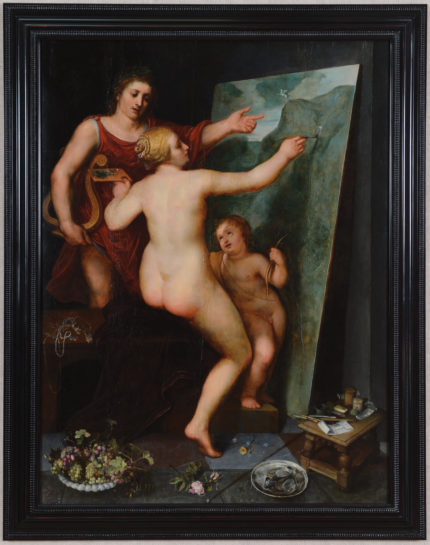