Not as old nor as unique as the atlatl but in the category more traditionally held to be treasure is a cache of coins found in Dawson City, Yukon, by construction crews building a new recreational trail. The stack of 23 coins was found a foot under the ground. There are both Canadian and American coins ranging in date from 1864 to 1902.

“These are coins that would have been in common circulation during the [Klondike] Gold Rush,” said Christian Thomas, special projects archeologist from the Yukon government.

“You don’t find money usually, abandoned at some of these historic sites… people usually kept their money with them and wouldn’t abandon those kind of valuable objects,” he said.

It’s no treasure trove, though. The coins have a face value of about $9.50, which Thomas said would not have gone far in gold rush-era Dawson City, when a pound of butter was selling for about $5.

“They probably would have been worth more in Seattle,” Thomas said.

Apples were a dollar apiece in Dawson City in 1898. Eggs ran a whopping three bucks a pop. Thus proving the point so artfully articulated by Deadwood‘s Al Swearengen that the real money in a gold rush is to be made not by prospecting, but by selling crap to prospectors. Adjusted for inflation, the coins’ face value today totals about $243. 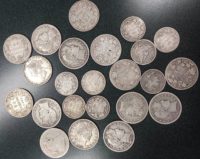 There’s no chance of identifying the owner. Anybody could have buried them in that spot. At the time of the gold rush, that area of town, known as the Menzies Addition, was in the bustling downtown where masses of people came and went all the time. They don’t call it a rush for nothing. The residents were largely transient folks with temporary gigs like day labourers and miners who had come to Dawson City with high hopes of striking it rich in an instant only to find nothing but drudgery and bare subsistence. Most of them would give up and leave within a year.

None of the buildings from that time have survived because they were largely transient too. There are no extant property records either, which means no surveyed plots, clear property lines, or real estate sale/lease contracts naming names. The documents that do exist are property tax records. They tell many a sad tale of foreclosure after foreclosure, indicating the transitory nature of settlement in Dawson City during the Yukon gold rush.