Construction of a new water pipe in Avenches, Switzerland, has unearthed a Roman mosaic floor of high quality and technique. The mosaic is about five feet by five feet and consists of geometric, floral and animal designs surrounded by a border of yellow tesserae. The thick border is dotted with larger marble tiles of different colors cut into irregular shapes. In the center of the mosaic is a medallion featuring two birds perched on a kantharos (a drinking cup).

The Roman settlement of Aventicum was founded around 15 B.C. and became a provincial capital as was an official colonia. It was a trade hub whose prosperity shows in the remains of several large-scale public buildings including an amphitheater, a theater, a temple complex and baths. The area where the pipeline is being installed was an outlying neighborhood along the ancient road between the western gate and the city’s temple complex. Judging from the remains of dwellings that have been found there, it was a wealthy enclave.

It has been only archaeologically surveyed a few times before now. The area under the Avenches bypass road was first excavated in the 1960s when the old road was widened. The remains of a temple enclosure, a sanctuary portico and the ancient town’s main road were discovered then, as were the remains of several buildings along the Roman road. Four years ago there was a significant dig 500 feet away from the current site and a handful of trenches were dug in 2005 and 2008.

The new dig covers far more ground. Since work on the municipal project began in April, crews have dug a trench a third of a mile long and archaeologists from the Roman Site and Museum of Avenches (SMRA) have been on site the entire time to monitor the work. The mosaic floor was part of a building built on the side of the decumanus maximus (the main road through town).

The mosaic is still in situ for now. The pipes will continue to be installed there and any ancient remains left in place will be damaged or even destroyed. In this case, the mosaic will be cleaned and documented before it is moved to the Roman Museum of Avenches. 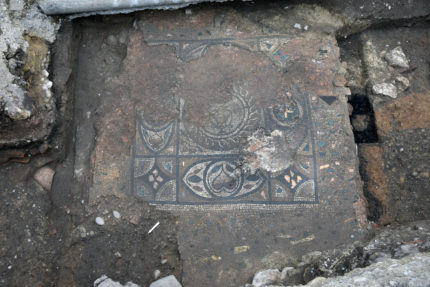 One thought on “Roman mosaic floor found in Switzerland”