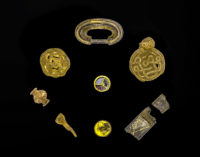 A treasure of gold artifacts from the German Iron Age has been discovered on the island of Hjarnø in the Horsens Fjord area off the eastern coast of Jutland. The first pieces of gold, small pendants were found by dental assistant and metal detectorist Terese Frydensberg Refsgaard and her fellow amateur archaeologist Brian Kristensen in 2017. They brought their finds to the museum in nearby Vejle where the experts told her to keep her discovery and its location under wraps to prevent treasure hunters from despoiling the place. Archaeologists followed up with a full excavation.

They were not disappointed. Between Refsgaard’s initial find and the professional dig, 32 different precious objects were unearthed. They include gold beads, pendants, a needle, and a number small gold fragments, clippings from larger pieces, usually coins, that were used as a currency. All of the artifacts are tiny, some of them more detailed than expected with designs the archaeologists have not seen before. They had to have been the product of highly advanced goldsmithing.

Mads Ravn, head of research at Vejle Museums, said the gold was thought to date from just before the Viking period and was likely buried around 500 CE.

The find suggests that people from Hjarnø had contact with the Roman empire, Ravn said.

“They probably took part in raids there, so our find is a small legacy from a turbulent time in world history in which gold speaks its own clear language” Ravn told DR.

The newly-found designs and craftsman skills will shed new light on a chaotic period when even the break-down of the Roman Empire paled in comparison to natural cataclysms that wracked the continent and beyond after a massive volcanic eruption in Llopango, El Salvador. The ash cloud spread from Central America to Europe, Turkey, Mongolia, China and Africa, blocking the sun and creating a mini ice age a decade long. Widespread famine and loss of human and animal life was the result. 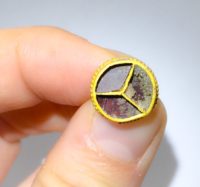 Archaeologists hope their analyses will discover where the gold was originally mined, how the objects were made, where they made and how and why they wound up on Hjarnø facing the sea to south. It’s possible the objects were deliberately laid as a sacrifice to petition the gods for survival during the long, cold darkness.

The artifacts will be going on temporary display at Vejle’s Museum of Cultural History in an exhibition dedicated to the upheaval of the post-volcanic 6th century, after which it will go to the National Museum of Denmark in Copenhagen for further study.

This Dutch-language video is worth viewing even if you can’t understand a word they’re saying because you get an idea of the minuscule size of some of the pieces that the photographs can’t convey. If any of our Dutch speaking readers would care to post a summary or highlights of the discussion, I would be ever so grateful. :thanks: