Very good boy Monty was enjoying the many sights and scents of the Orlické mountains on a walk with his owner near the northern Bohemian village of Kostelecké Horky this March when something caught his nose. He began digging frenetically to get to it. Monty’s owner, Mr. Frankona, watched as the pup unearthed a sickle-shaped artifact. By the time the two of them were done, they had picked up 13 bronze sickles, three axes, two spear points and several bracelets.

Frankona handed them in to the Museum and Gallery of Orlické Mountains in the nearby town of Rychnov. Experts examined the group and determined the objects are more than 3,000 years old. Made of bronze, they are in excellent condition despite their advanced age. They are intact with no damage from extensive use or from the millennia spent underground.

“In addition to its professional value, the discovery has a high aesthetic value. It is a find of whole tools and jewels, it is beautiful and there are several stories behind it. Most likely, it is a sacrifice and leads us into a world that is only rarely opened on the basis of material finds. The other level of his knowledge is indicative of intense contacts and acceptance of patterns from southern neighbors – there is a habit of storing all objects. Equally important is the evidence of technological excellence and aesthetic feelings of local craftsmen, ” explains Martina Bekova, archeologist at the Museum and Gallery of the Orlické Mountains.

In the vicinity of the find, archaeologists carried out another survey using a metal detector. The discovery is really unique. The surrounding terrain has been greatly changed in the past, and it can not be ruled out that something has already been destroyed or that the layers still conceal some surprises. The vast majority of treasures will be found by amateurs. The explanation is quite simple – depots, whether they were meant as hidden treasures, reserves, warehouses, sacrifices – were practically always deposited outside commonly populated sites and outside the burial ground. Only rarely will there be a common archaeological research, which is dedicated to housing estates and burial grounds.

This kind of find is very rare in the region. The last time anything similar was found in Eastern Bohemia was in 1953. Mr. Frankona received a reward of 7860 Czech koruna ($360) from the government of the Hradec Králové Region. No word on whether he cut Monty in on the deal.

The artifacts went on display in the Journey to the Beginning of Time exhibition at the New Castle museum in Kostelec nad Orlicí on September 13th for a week. September 21st is their last day as part of the show. After that, the bronze objects will be studied and conserved. Once they are stabilized, they will go on permanent display at the New Castle. 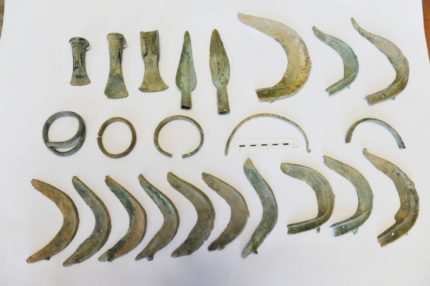