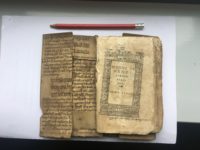 A fragment of a medieval manuscript used in the binding of a printed book has been identified as a unique Irish-language translation of a medical compendium by the great Islamic philosopher and physician Avicenna. Written on vellum in the 15th century, the fragment was part of a manuscript of Book 1 of The Canon of Medicine, a five-volume overview of medical knowledge in the Islamic world written in 1025 by Persian physician Ibn Sina (Avicenna in the Latinized version). The fragment is small, consisting of parts of descriptions of the physiology of the jaws, nose and back. It is an Irish translation of the Latin version of the text translated from the Arabic by Gerard of Cremona in the 13th century. This fragment is the only known example of Avicenna’s Canon in Irish.

The ‘Canon of Medicine’ was a great medical encyclopedia which, through translation into Latin (from which the Irish text itself is translated), achieved great popularity in Europe, where state-of-the-art medical theory and practice in medieval times had their origins in the Muslim world. The Irish fragment contains parts of the opening chapters on the physiology of the jaws, the nose and the back. The existence of this text was not hitherto known in Ireland.

Medical scholarship in medieval Gaelic Ireland was on a par with that practised on the Continent and was the most outward-looking of all the native branches of learning. There is evidence of Irish scholars travelling to European medical schools, and bringing their learning back to the medical schools of Ireland.

A century later, a sheet of the manuscript was heavily trimmed along the top and sides, sheering off a significant portion of the text, and folded four times to be used as a bifolium cover of a printed book. The book, a Latin manual of local administration, was printed and bound in London between 1534 and 1536. Since that time, it has been in the possession of a single English family, amazingly enough.

Professor Pádraig Ó Macháin of the University College Cork found about the existence of this volume and as an Irish professor, was intrigued by the Irish language sheet.

“The use of parchment cut from old manuscripts as a binding for later books is not unusual in the European tradition,” says Ó Macháin, “but this is the first time that a case has come to light of such a clear example of the practice in a Gaelic context.” From photographs of the binding supplied by the owners, Prof. Ó Macháin established that the Irish text was a medical one. “A quarter of what survives of late-medieval manuscripts in the Irish language is medical in content,” says Ó Macháin, “an indication of the practical purpose of these books in Ireland of the time.” 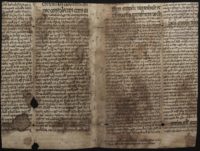 Professor Aoibheann Nic Dhonnchadha of the Dublin Institute for Advanced Studies, who bears the indisputably awesome distinction of being “the only living expert on medieval Irish medicine,” identified it as Avicenna’s classic tome. Persuaded by its unique importance in the history of Irish philology, books and medicine, the owners of the book agreed to allow the vellum sheet to be removed and the book rebound sans its priceless structural captive.

John Gillis of Trinity College Dublin removed the manuscript fragment from the binding, flattened the folds and conserved it as a single sheet. The fragment has been digitized and uploaded to the Irish Script on Screen website.