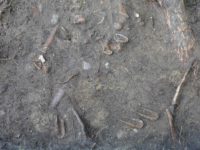 An excavation of a centuries-old gallows site in Żagań, western Poland, has unearthed extremely rare execution chains used in public hangings in place of rope. The site is known as Gallows Hill because it was the gibbet used for public executions from the 16th to the 18th century. The condemned would be hanged or decapitated and their bodies left to rot, very visible examples of the fate any potential criminals had to look forward to should they choose to break the law.

One of the two chains found is fragmentary, with only a single link extant. The other has four links and archaeologists believe it was complete. That would make it the third complete execution chain ever discovered in Poland. 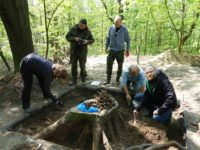 Lead archaeologist Dr. Daniel Wojtucki from the University of Wrocław believes the iron chains were used to ensure the dead bodies would hang for a good long time, rotting away gradually in full public view. Rope frays and breaks, especially when it has been subject to the stress of a weighted drop, but chains will easily outlast the decaying corpse. Iron nails used to attach the ropes or chains to the gallows were also unearthed.

According to others – for example Magdalena Majorek, who leads the excavations in Żagań together with Bartosz Świątkowski, archaeologist from the University of Gdańsk – they were used mainly for people who committed serious crimes.

“Chains of this type constrained the larynx, so this execution method was very painful” – the researcher adds.

According to the researchers, one of the chains was used during the execution of the death sentence issued in September 1716 by the Prague Appeals Chamber. Dr. Wojtucki estimates that the execution took place at the turn of 1717.

There are no precise records tallying up the number of people executed on Gallows Hill. Researchers estimate the figure was at least in the dozens, and the excavation unearthed thousands of bones and bone pieces. Among the findings were skulls and individual bones, but also one intact inhumation burial. That individual had been decapitated and his head placed between his feet.

The site didn’t just hold the remains of the executed criminals. This year’s dig uncovered two burials parallel to each other with a respectful distance between them, the kind of plots you’d find in a cemetery. Convicts were not afforded that privilege. Archaeologists believe these were suicides. Unable to be buried in the consecrated ground of the churchyard, they were interred in the other place of the dead.

5 thoughts on “Execution chains found at gallows site in Poland”