The Smithsonian’s National Museum of American History is displaying nine rarely-seen silk quilts in a new exhibition that runs through January of 2020. Everyday Luxury: Silk Quilts from the National Collection features exceptional quilts made in the late 19th century alongside related artifacts including personal sewing kits, needlework books, tools and embroidery samples.

The quilts illustrate in vibrant color the explosion of silk manufacturing in the northeastern United States. Silk was a luxury import for thousands of years, more expensive than gold, subject to sumptuary laws that made it the exclusive province of the elites. The bottleneck was always the mulberry tree, home and nourishment of the silkworm without whose cocoons there would be no silk. There had been many attempts to cultivate mulberry trees especially in New England, but the vagaries of the weather did not agree with the sensitive trees.

In 1826 a new, hardier varietal, morus multicaulis, was introduced to the country, and textile manufacturers went all in, buying so many of the new mulberry trees that the price skyrocketed, reaching a high of $30 per 100 trees in 1836, an increase of almost eight times in two years. There was just one problem: morus multicaulis wasn’t all that hardy after all and in 1837 the bubble burst. Mulberry farms went under and the once-precious trees were sold for brush or burned.

Still, the explosion of interest in the potential of locally-grown silk did have a positive effect on industry visionaries like the Cheney brothers of Manchester, Connecticut. They recognized even before the failure of the mulberry farming experiment that there was profit to be made in applying American manufacturing to the raw material imported from Japan, China, Italy and the Middle East. An 1847 Cheney invention, the Rixford Roller, was a major leap forward in US silk manufacture, winding raw silk into much more durable double-twisted threads. Eight years later, the Cheney Brothers discovered how to spin waste silk into a high quality product. They were the first in the world to figure out a way to make unblemished silk fabric out of damaged cocoons.

By the 1870s, silk manufacturing was very big business in the United States and American inventions were found in silk factories all over the world. The industry reached its zenith in the 1920s, declining only with the advent of the Great Depression from which it would never recover. During those 50 heady years, however, silk underwent a process of democratization, shifting from an unattainable symbol of wealth to affordable beauty. Even a working class girl could have a silk dress for her Sunday best.

Inspired by the availability of inexpensive silks, a new fad emerged nationwide in the 1880s for ‘crazy patchwork’ quilts. Quilt makers adopted asymmetry and layered patterning, moving away from the rigid geometric piecework of traditional quilts. Silk embroidery added dimensions and texture to the quilts. These quilts were never meant to be used as bedding. Instead, they were a statement of status and style at the turn of the 20th century. They tell a little-known story of art, industry, trends and marketing in American history.

“The quilts on display demonstrate individual imagination and skill,” said exhibition curator, Madelyn Shaw. “But beyond that, they represent America’s silk industry: thousands of mill workers, hundreds of companies, business people and designers. The quilts offer us a unique perspective on this period of industrialization in American history.” 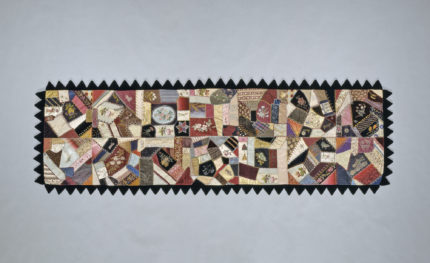