A proof sheet of stamps designed by T.E. Lawrence, aka Lawrence of Arabia, has been found folded over and forgotten in the Royal Philatelic Collection in St. James’ Palace, London. Lawrence designed the stamps for the Kingdom of Hijaz, a coastal area in the west of what is now Saudi Arabia, which existed only from 1916 to 1924.

Ruled by Sharif Hussein ibn Ali, father of Lawrence associate Prince Faisal, later King Faisal I of Iraq, Hijaz included the Islamic holy cities of Mecca and Medina. In 1924 it was annexed by the Saud family and eventually folded into what would become the Kingdom of Saudi Arabia.

Lawrence had famously helped fight for Arabian independence from the Ottoman Empire during World War I, and would be a member of Faisal’s Arab delegation to the Paris Peace Conference in 1919, so when the Kingdom of Hijaz was created in 1916, Lawrence was asked to design its first three stamps. He later claimed to have used strawberry-flavored glue which drove people to buy the stamps just to lick them instead of using them. 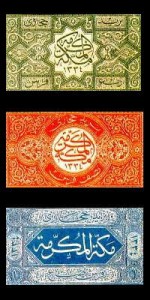 A proof sheet of his 3 designs — no word on whether they taste like strawberry — along with a handwritten letter by T.E. Lawrence made it into the extensive philatelic collection of George V.

The original sheet of 50 stamps had been folded over so that it could not be seen in one of the 328 albums of the collection, started in the 1890s.

It was found by a member of staff at the Royal Philatelic Collection. Lawrence’s three designs were all decorative, as Islam frowned on figurative images of humans or animals.

George V’s enthusiasm for stamps was equalled only by his love of shooting pheasants. He is thought to have spent about three afternoons a week arranging the stamps and it is believed there are enough loose items to fill another 2,000 albums.

Which explains how such a remarkable piece could have gone unnoticed all these years. Hijaz stamps are all extremely rare and valuable today, even the ones not designed by the legendary Lawrence of Arabia.

The proof sheet and the stamps will go on display at the Guildhall Art Gallery in London starting on May 7th.

7 thoughts on “Stamps designed by Lawrence of Arabia found”