The cartoons created by Renaissance master Raphael for the monumental tapestries that once adorned the walls of the Sistine Chapel are enormous at 10 feet high and between 10 and 16 feet wide. Their digital form, however, has been relatively puny. In my first post about just shy of 11 years ago, the available pictures were so inadequate I considered not writing it at all because of how disappointing it is to read about something so cool without having a chance to see it in at least some detail.

Originally a set of 10, seven of the cartoons depicting scenes from the lives of Saints Peter and Paul survive today.  They were used to create tapestries, not just the original tapestries commissioned by Pope Leo X in 1513, but for later customers who wanted a piece of Raphael’s genius in woven form, Henry VIII among them. As part of the weaving process, the cartoons were folded, cut, punctured and generally put through the wringer until they simply fell apart. 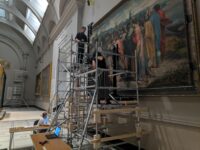 The surviving cartoons were acquired by the future King Charles I in the 1620s and while they are still today personally owned by the monarch, they have been on long-term loan to what is now the Victoria & Albert Museum since 1865. In 2019 and 2020 the V&A refurbished the Raphael Court and conservators had the opportunity to study and record the cartoons with the latest technology. They were unframed, the punctured and torn surface scanned in high-definition 3D and the images recorded in infrared and panoramic composite photography. Custom scaffolding was installed to scan the cartoons while they were still mounted on the walls of the gallery because they are too fragile to move. The 3D scans alone took 95 hours per cartoon to complete.

The reopening of the refurbished Raphael Court has been delayed by lockdown, but the new digital content collected during the process has now been made available on the V&A website, and it grants unprecedented access to the cartoons.

Through interactive features and in-depth stories, audiences will be able to learn about the extraordinary design and making of the Cartoons and their long 500-year history, exploring the monumental works of art as never before by zooming into ultra-high-resolution photography, infrared imagery, and 3D scans. […]

Key online features include The Story of the Cartoons, which explores the Cartoons’ commission, production and incredible survival, as well the complex process of translating a Cartoon into a tapestry. It also reveals in-depth details about Raphael’s compositions which translate the Biblical narrative into painterly images with their wealth of characters and complex scenes. Exploring the Cartoons uses the new HD imagery of the Cartoons to enable newcomers and specialists alike to examine the

making and design of the Cartoons in more detail by zooming into high-resolution panoramic photography of their painted scenes, infrared imagery showing the charcoal drawing underneath, and 3D scans of their paper surface. Users are able to transition between the layers to see subtle differences between the underdrawing, the paint layer, and the surface texture – from the tiny pinholes that were made to translate the Cartoons into tapestries, to the composite sheets of paper that make up each Cartoon, the creases and tears, and subsequent restoration and repair throughout their lifetime.

Without further ado, check out the V&A’s new Raphael Cartoons page to finally see these extraordinary survivors in all their glorious detail.