Just kidding. It’s actually $546 million, and that’s only the opening bid. The sky’s the limit when the Villa Aurora in Rome, home to the only mural ever painted by Baroque master Caravaggio, goes under the hammer in January.

The Villa Aurora is all that remains of the grand estate built by Cardinale Ludovico Ludovisi on the site of what had once been the Horti Sallustiani, the luxurious garden palace of 1st century B.C. historian Sallust. Magnificent ancient sculptures including the Dying Gaul, the Ludovisi Gaul and the Sleeping Hermaphroditus were found when the villa was built in the 17th century. The main villa and numerous outbuildings were set in a vast landscaped garden bordered to the north by the Aurelian Walls.

The estate remained in the Ludovisi family until 1885 when everything but the Villa Aurora was sold to developers who demolished everything and chopped the land up into luxury building lots. The Boncompagni-Ludovisi bought one of those lots and built a new palace on it which is now home to the American Embassy.

The Casino dell’Aurora actually predates the lost Ludovisi estate. It was the hunting lodge of the country home (Rome was a lot smaller then) of Cardinal Francesco Maria Del Monte, the young Caravaggio’s most dedicated patron. He commissioned Caravaggio to cover the ceiling of a room just nine feet wide with an oil painting depicting Jupiter, Neptune and Pluto. Del Monte was an alchemy buff — the small room was his lab — and the deities were allegorical representations of Paracelsus’ alchemical triad of sulphur/air (Jupiter), mercury/water (Neptune) and salt/earth (Pluto). Each of the gods is accompanied by his emblematic animal. Jupiter has his eagle, Neptune his hippocamp and Pluto his very good three-headed boi Cerberus. Caravaggio foreshortened the figures to create a dramatic perspectival effect as if the gods were standing on the ceiling.

Another masterpiece of perspective from a Baroque luminary adorns the villa’s entrance hall. Guercino, commissioned by the Ludovisi, painted an elaborate vision of Aurora’s chariot bringing in the dawn. The villa was named after this scene.

The sale of Villa Aurora comes after a lengthy inheritance dispute after the death of its owner, Prince Nicolò Boncompagni Ludovisi, in 2018.

“There are other rooms decorated spectacularly but the most important works are by Caravaggio and Guercino,” said [Sapienza University history professor Alessandro] Zuccheri. “It’s a place that’s unique in the world.” […]

Because the site is protected by the ministry of culture, once a bid has been agreed at auction, the state will have the chance to buy the property at the same price.

“The state will have the right to buy it; the problem will be whether it can pay such a high price,” said Zuccheri. 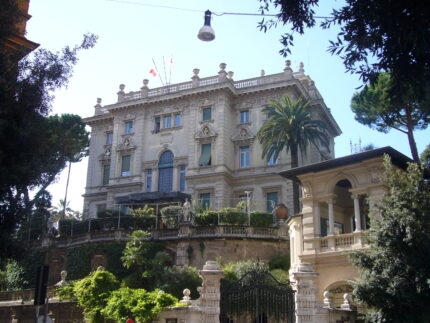