The excavation of the Roman villa in Rutland, East Midlands, where the spectacular (and spectacularly bloody) Trojan War mosaic was discovered in 2020, has unearthed a new surprise: a large barn that was converted into residential quarters complete with a three-room bath facility.

The Trojan War mosaic is one of the most important mosaic finds ever made in England and the site was immediately granted protected status. The mosaic itself has been reburied for its protection, but University of Leicester Archaeological Services (ULAS) in partnership with Historic England returned to the site this year to expand the excavation and learn more about the villa that houses such a unique example of ancient art from the waning days of Roman rule in England. The information and artifacts gathered will be essential to understanding the full context of the mosaic and ensuring its long-term preservation.

This year the ULAS team used data from a geophysical survey to plan an excavation strategy that would reveal different sections of the villa. They dug a series of trenches down the length of the site, unearthing a huge aisled building approximately 100 feet long and 40 feet wide. Originally a timber barn, the building was rebuilt in stone in the 3rd or 4th century and terraced into the hillside, protecting it from the elements. Archaeologists have discovered evidence of agricultural and industrial production on the eastern end of the building. The western end was a residential space. It was converted to this purpose at some point in its history, the open barn partitioned to create multiple rooms on multiple floors. 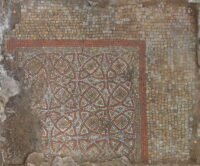 On the southern side of the building is a remarkable bath complex with caldarium (steam room), tepidarium (warm room) and frigidarium (cold pool). The tile stacks of the hypocaust underfloor heating are still present, and are also in situ at the base of the walls, meaning that this complex didn’t just have heated floor and pools, but heated walls too. There’s even the base of a water tank attached to the exterior walls, likely a rainwater catchment system collected from the roof of the building.

This year’s excavation also returned to the triclinium, the dining room where the Trojan War mosaic was found in the main building of the villa. The team was able to discover the cause of a slump of the floor on the long side of the room: an old boundary ditch. The villa was built over it and subsidence of the soil caused the floor to sink. Pottery found inside the ditch dates it to the 2nd century, an indication of the age of the site. The excavation revealed that the main building was also a conversion. It too began as an aisled building that was later added to in stages. The triclinium was one of those additions.

The dining room had been built as an extension to the main villa, suggesting that the owners wanted a special area for feasting as they gazed over the Iliad mosaic.

The new excavations also revealed additional mosaics in the corridors leading to the dining room, including one with a kaleidoscopic geometric design.

John Thomas, the deputy director of the University of Leicester archaeological service, said: “It’s difficult to overstate the significance of this Roman villa complex to our understanding of life in late Roman Britain. While previous excavations of individual buildings, or smaller-scale villas, have given us a snapshot, this discovery in Rutland is much more complete and provides a clearer picture of the whole complex.