There wasn’t much left of the 7th Cavalry that Lieutenant Colonel George Armstrong Custer so boldly and so incompetently led into battle against the Lakota Sioux and Northern Cheyenne near the Little Bighorn River in what was then Montana on June 25, 1876. The Lakota and Cheyenne picked the field virtually clean of artifacts and military regalia after their victory.

Three days later, all that remained of the 210 of the troops under Custer’s command were being collected by a burial detail. Sergeant Ferdinand Culbertson found a tattered flag under one of the bodies. It was a silk swallow-tail American flag known as a guidon, and Sgt. Culbertson folded it up and slipped it into his pocket. A few years later he gave it to one Rose Fowler, who eventually moved to Detroit and in 1895 sold it to the Detroit Museum of Art for $54. Here’s a fascinating contemporary write-up (pdf) of the the flag’s history from the March 1895 edition of Detroit Free Press.

The Detroit Museum of Art is now called the Detroit Institute of Arts and they’ve decided to sell the guidon at Sotheby’s this fall. In 1895 the museum was a curio cabinet of sorts, with all kinds of different pieces on display. The Detroit Institute of Arts, however, is exclusively an art museum now and they’re trying to build a world-class art collection in a sluggish economy. As important a historical artifact as this flag is, it’s not on-topic for DIA, and Sotheby’s $2-5 million estimate is the equivalent of 1-2 years of DIA’s acquisition budget. With this one sale, they can at least double, probably triple, and very likely quadruple + the amount they spend purchasing art in a year. 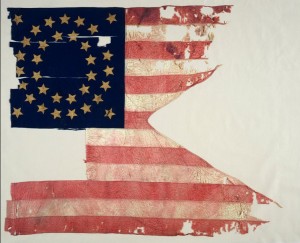 That estimate is probably a lowball. The last flag of major US history import was a Revolutionary flag captured by the British at the battle of Bedford in 1779. It brought a record price for military relics when it sold for $12.3 million in 2006. Obviously the Little Bighorn flag is a hundred years younger, but Custer’s Last Stand has become such a legendary part of the American story, I wouldn’t be at all surprised if the guidon broke the record.

John Doerner, chief historian at the Little Bighorn Battlefield National Monument, said he believes the flag is stained with the blood of a fallen soldier and that the banner belongs to the American people.

“It was an act of courage and bravery,” said Doerner, a 20-year veteran of the National Parks Service.

“To lose the colors was really something that a soldier would give their lives [to prevent],” he said.

Doerner is helping oversee events for the battle’s anniversary this weekend at the national monument, where visitors will hear symposiums and view re-enactments. He is hopeful that a benefactor will purchase the flag and loan it to a national museum.

The Little Bighorn Battlefield National Monument owns the only other 7th Cavalry guidon to have survived the battle — known as the Keogh guidon — but it’s in very poor condition and is too delicate for permanent display. It was just on public view 5 days ago, in fact, for the anniversary of the battle, but it returned to conservation storage the next day. Here’s hoping the Culbertson guidon manages to find its way into the public patrimony too.