Ukrainian and German police forces collaborated to bust a ring of international art thieves who were attempting to sell a stolen Caravaggio painting to a German collector in Berlin.

Ukraine’s Interior Minister Anatoly Mogylyov said that investigations have linked this gang to 20 other major art thefts in the Ukraine, and 20 suspected members of the gang have been detained there. The ministry is filing for extradition of the alleged thieves arrested in Germany.

The German newspaper said police in Germany detained three Ukrainian nationals and a Russian when they attempted to hand over the painting to the buyer.

The painting was brought to Odessa at the beginning of the 20th century. It was long believed to be a copy of a Caravaggio, but the authenticity of the work was established in 2005 while the canvas was on exhibit in Spain.

Soviet experts had declared it authentic in the 1950’s, but the attribution was still questioned until it went on tour in 2005. It was restored in 2006, although from the looks of it it’s going to need a whole new round of tender loving care after how the thieves manhandled it.

The painting, known as “The Taking of Christ,” or “The Kiss of Judas,” was stolen 2 years ago from the Museum of Western and Eastern Art in Odessa, Ukraine. The thieves broke into the museum through a window at night, removed the glass pane shielding the canvas and cut it out of the frame, all without setting off a single alarm. It was major loss to the museum and to the Ukraine. It was their only Caravaggio and the single most valuable painting in the country, worth tens of millions of dollars.

There is another copy of the same painting in Dublin’s National Gallery of Ireland. It too is thought to be in Caravaggio’s hand, but it’s hard to say. 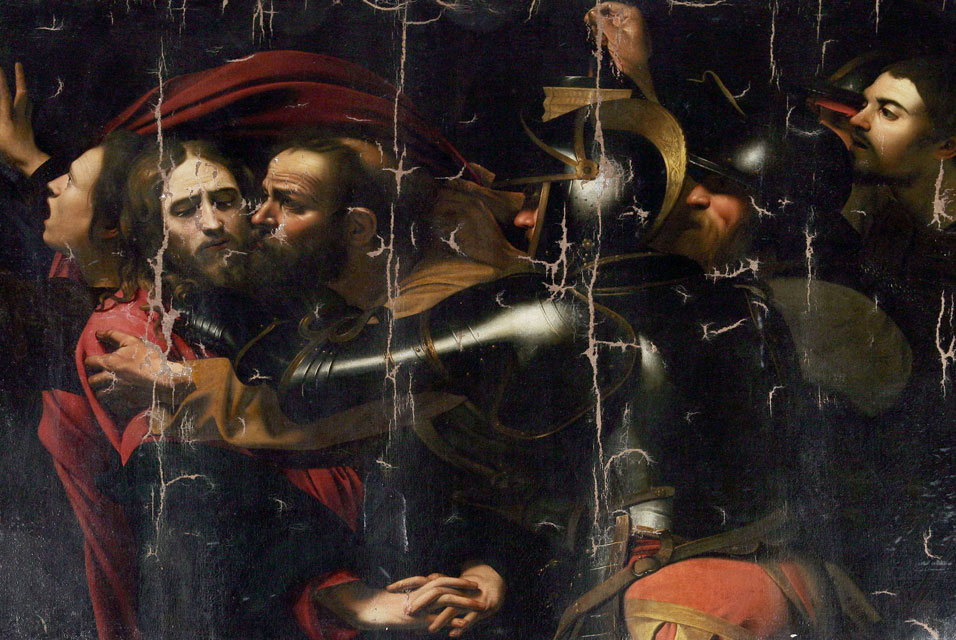