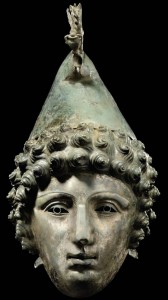 In May of this year, an unnamed metal detectorist found an extremely rare bronze Roman cavalry helmet complete with face mask in Crosby Garrett, Cumbria, UK.

It would have been used in cavalry sports events — shows done in honor of religious festivals or visiting dignitaries — not during battle, which is why it’s so beautifully decorated. The face was originally plated in tin, so it would have shone brightly and contrasted with the gold bronze color of the curls. There are rings along the back and on the griffin crest which may have had streamers tied to them during the display.

It is one of only three complete helmets with face masks ever found in Britain. The other two are in museums. This one will be sold to the highest bidder in a Christie’s auction October 7th.

Tullie House in Carlisle, which has an important Roman collection, is desperate to acquire the helmet with the backing of the British Museum, but faces an uphill battle to match bidders at next month’s sale. One expert believes the helmet could go for £500,000 or more. […]

If Tullie House is outbid, as seems inevitable, export of the helmet is likely to be temporarily barred by the government to give a British museum the chance to match an overseas buyer’s bid.

Here’s hoping. Christie’s estimate is £300,000, but that strikes me as an absurd lowball figure. In fact, it’s almost weird how low the estimate is given the exquisite beauty and rarity of the piece. I wouldn’t be at all surprised to see the final purchase price be out of museum range.

When members of the public find antique objects in the UK, they can voluntarily report them to a local archaeological authority. If the objects are judged treasure, a fair market value is determined and museums given the opportunity to pay the finder and landowner the assessed amount. There’s a yawning loophole, however, through which this remarkable helmet has fallen: treasure is defined as gold and silver, or bronze if part of a hoard. A single bronze object, no matter how rare, how special, how much UK museums would fall over themselves to get it, does not count as treasure, so the finder can just hand it over to Christie’s for his and their profit.

There are other shadinesses involved in this deal. Neither the treasure hunter nor Christie’s has reported the exact location of the find. The helmet was found in pieces and Christie’s put it back together for the sale. No archaeological study of the fragments was done before restoration, and we don’t even know how exactly Christie’s put humpty dumpty back together again. The age estimates have varied from 1st through 3rd century A.D. (they’re sticking with 1st-2nd c. in the auction catalogue) but that’s all from Christie’s experts. Nobody knows what kind, if any, scientific analysis has been done. Therefore, as beautiful and precious as this piece is, it is now a contextless piece of ancient art, just like so many looted objects.

Paul Barford, archaeologist and writer of the exceptional Portable Antiquity Collecting and Heritage Issues blog, lays out many of the issues in this entry. He also gives great rant in this more recent entry.

I say let the Crosby Garrett helmet go abroad. Let it be an easily understood symbol for the people of the British Isles just how their archaeological heritage is being squandered by those who should be protecting it. Furthermore, I hope it goes to the furthest ends of the Earth so that any Brits who want to see it can put themselves for a moment in the place of all those citizens from “antiquities’ source countries” who have difficulty seeing their own region’s archaeological heritage because it is hoarded away as (oh-so-culchural) trophies in western museums and personal collections.