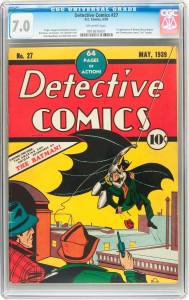 Robert Irwin bought a copy of Detective Comics #27 at a Sacramento newsstand in 1939 for a dime. He was 13 and an avid reader of comics. This one issue was the only one he kept past childhood. Thursday he sold it at auction for $492,937.

Detective Comics #27 features the first appearance of “The Batman.” Although 250,000 copies of the comic were printed in 1939, only 150 are known to be extant today, hence the big price tag. Mr. Irwin kept his in excellent condition over the years, but even so it’s still not the top of the market for this particular issue. Earlier this year, Heritage Auction sold a near-mint copy for $1.75 million.

In fact, it was that sale that inspired Robert Irwin to finally sell his copy. He had rediscovered it 6 years earlier and he knew he had something special when a collector offered him $100,000 for it. He turned down the offer and held on to it for another 5 years.

As impressive as the sale price is, that’s not the part that gives experts the biggest thrill. It’s the backstory, the fact that the boy who bought it when it was new in 1939 is the man who sold it in 2010.

Although he has seen comic books sell for more than a million dollars, Jaster considers this auction a once-in-a-lifetime kind of sale at the auction house.

“I’ve been here for nine years and been part of a lot of major auctions, but this one was unique,” said [Ed Jaster, senior vice president at Heritage]. “To come across an item that someone bought for 10 cents and have it sell for almost a half million dollars — that’s special.”

When asked why he kept only this one comic out of the hundreds he and his brother bought when they were kids, Irwin said: “I don’t know. I must have just liked the cover.” The cover was designed by the great Bob Kane himself, so that’s as good a reason as any.

Once the auction house gets its cut, Irwin should clear about $400,000. He’ll celebrate with his wife and son over dinner in Dallas, then he’s going back to Sacramento to pay off his mortgage.