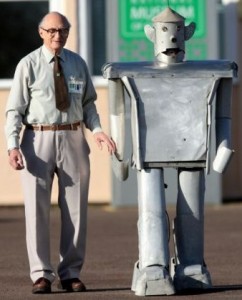 All it took was a little oil on his joints and a fresh pair of batteries. Durability and ease of repair is where rudimentary early technology spanks the fancy new stuff. (Also because it’s not connected to the network so when Skynet turns evil and the Cylons launch their attack, George will still be on our side. Walking. Very, very slowly.)

Royal Air Force officer Tony Sale built George in 1950 for £15 and scrap aluminium and duralumin he scavenged from a Wellington bomber that had crashed at RAF Debden air base where Sale taught student pilots how to use radar. The 6-foot robot is powered by two 12-volt motorcycle batteries in his legs. His eyes light up and he can walk, turn his head, move his arms, and sit down. He used to be able to zero in on a specially-designed illuminated beer bottle with light sensitive cells in his eyes, but alas that functionality is no longer.

Mr. Sale is a robotics pioneer, and has been from a very young age.

Mr Sale has always been interested in mechanics and built his first George the robot using Meccano when he was just 12 years old. The instructions for making the robot were in the Meccano manual and it could walk at a steady pace by shuffling its feet.

In 1945 Mr Sale made a second George the robot and three years later at the age of 17 he improved it by making it bigger and controlling it by radio. This new 3ft version was also made from Meccano, but was covered with a silver cardboard skin and was considered so impressive it appeared on television.

“That summer I decided to build a fourth George, which was 5ft high and had a moving jaw to simulate speech,” he said. “He caused lots of excitement and was featured in the newspapers.”

But it was the 5th George that really made a splash with his impressive 6-foot height, 30 foot-range radio control, uncanny resemblance to the Tin Woodman and, of course, that sweet beer trick. Pathé made a classic 50s newsreel about him and his (fictional) housekeeping skills and he got a great deal of attention from the press for a while.

Shortly thereafter George’s 15 minutes were up and since the technology necessary to give George even rudimentary artificial intelligence was either non-existent or unminiaturizable, Sale packed George away in a corner of his garage where he remained for 45 years. When a BBC television show called Wallace and Gromit’s World of Invention contacted him to ask after George, Sale dusted him off, gave his bearings a fresh coating of oil, put two new lithium batteries in his legs and he booted right back up like old days.

Now that he’s alive (ALIVE!) again, he’ll be going on display at the National Museum of Computing at Bletchley Park, the war-time home of the famous Colossus computer that broke the Nazi Lorenz cipher. Sale helped found the museum, and he led the team which spent 10 years recreating the Colossus Mark 2 computer which now stands in the same exact place the original once stood, breaking German codes during the war.

You can see the full 1950 newsreel about George excerpted in the above video on British Pathé’s website.

4 thoughts on “George the Robot walks again after 45 years”