When Louis Comfort Tiffany’s Long Island estate Laurelton Hall burned down in 1957, scavengers flocked to the site to scoop up whatever they could find. Hugh McKean, a personal friend of Tiffany’s who had lived on the estate as fellow-in-residence, and his wife Jeannette took away large chunks of the 84-room house. What they didn’t salvage on the spot, they spent four decades locating and buying from sales, auctions and owners.

They founded the Charles Hosmer Morse Museum of American Art in Winter Park, Florida to house the Laurelton Hall pieces and the rest of their collection of Tiffany objects. Most of the collection remained in storage until 2006, when the Morse Museum collaborated with the Metropolitan Museum of Art in New York to unpack the pieces and put them together for a temporary six-month display.

The reconstructed Daffodil Terrace, so named because its columns are topped with long-stemmed glass daffodil capitals, was the centerpiece. As soon as the Morse board members saw it at the Met, they realized they couldn’t just pack it back up once the exhibit was over. So the Morse spent $5 million building a new 6,000-square-foot wing to house the Daffodil Terrace and the 250 other Tiffany pieces in the collection.

Construction is done and the new wing is scheduled to open on February 19th. The new gallery was designed to mirror the flow and placement of Laurelton Hall, and to emphasize Tiffany’s characteristic blurring of indoor and outdoor spaces.

The Daffodil Terrace will be displayed in a glassed-in alcove to recreate the feel of the original outdoor space.

“It’s bathed in natural light for the first time since it was taken from the estate,” said Catherine Hinman, the museum’s director of public affairs.

As it did at Laurelton Hall, the terrace flows directly into a recreation of the estate’s dining room, which includes a nearly 14-foot high mosaic mantelpiece, 25-foot long Oriental carpet and a suite of six leaded-glass wisteria transoms.

The adjoining living room features four leaded-glass panels depicting the four seasons, which won a gold medal at the Exposition Universelle in Paris in 1900, and five turtleback-glass hanging lamps.

The Morse Museum website has set up a webcam in the Daffodil Terrace gallery. Right now it just looks like grainy security cam footage, but I’ll try again tomorrow when the alcove should be bathed in natural light. 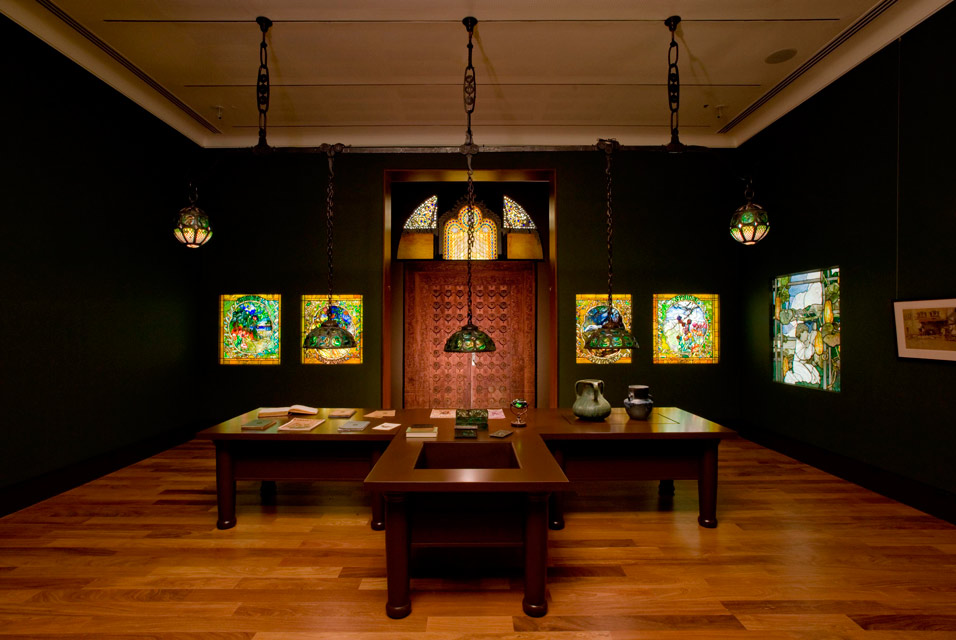