It’s not any of the major pieces of the Parthenon frieze controversially housed in the British Museum. Lord Elgin gave this fragment to the British consul-general of Sicily when he was passing through with his ill-gotten gain in 1816.

It’s been in Sicily ever since, and now it’s finally home, personally transported to Athens by Italian President Giorgio Napolitano.

The sculpted fragment of the ancient Greek hunt goddess Artemis, part of the eastern Parthenon frieze depicting the twelve gods of Olympus, had been in the collection of the Antonio Salinas Archaeological Museum of Palermo.

Greece had sought to secure its return for 13 years, the Greek culture minister said.

The fragment depicts the goddess’ right foot and part of her long robe.

“For the first time in nearly two centuries, a valuable fragment of the Parthenon’s sculpted decoration returns to be embodied where it belongs,” Culture Minister Michalis Liapis told reporters.

Hint, hint. Ever since the New Acropolis Museum opened, Greece has been putting serious pressure on the British Museum to return the Parthenon Marbles.

The BM hasn’t been receptive to Greek entreaties, needless to say. Collecting fragments of the frieze scattered about is a great way to keep the situation in the papers and to make the British Museum look like a dick for not being willing to even consider what other countries are doing. 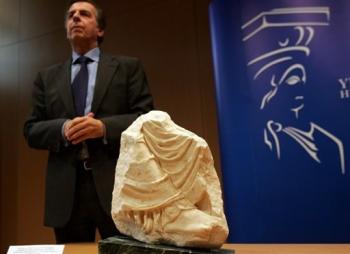 Edit for clarification: The piece is on loan to Greece. It will return to the Palermo museum at the end of the year.

6 thoughts on “A little chunk of Elgian marble returns home”