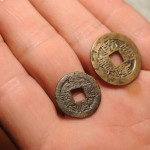 Not a contemporary tavern; a 19th century one. It was between Albany and Schenectady back in the day, so it probably saw a great deal of traffic from all kinds of people, including, say Chinese immigrants.

There were also trading ships traveling between Albany and China as far back as the late 18th c.

The coin, which has a square hole stamped in the center and is the thickness of a dime, was discovered about a foot deep in the soil around a stone feature that may have been associated with an older wing of the building, which dates to between 1805 and 1810, said Corey McQuinn, project director for Hartgen Archeological Associates, the company hired to do the work.

From the site, the coin was shipped to Hartgen’s laboratory in North Greenbush, where conservation director Darrell Pinckney placed it in an electrolytic reduction bath, which uses a solution and mild electric current to remove centuries of crust.

From the context, it seems likely the coin is a couple of hundred years old. They won’t know for sure how old it is or where it comes from until expert Chinese numismatists take a close look at those markings.