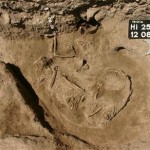 Okay not really. I was just going for the splashy headline with the Paris and Helen thing.

But the skeletons of a man and woman were indeed found buried together in Troy, in what is now Turkey. The remains haven’t been carbon dated yet, but pottery found near them dates to 1200 BC, the time of the Trojan War.

Ernst Pernicka, a University of Tubingen professor of archaeometry who is leading excavations on the site in northwestern Turkey, said the bodies were found near a defense line within the city built in the late Bronze age.

The discovery could add to evidence that Troy’s lower area was bigger in the late Bronze Age than previously thought, changing scholars’ perceptions about the city of the “Iliad.”

The lower parts of the the bodies are missing, and it could be that the pottery is from one period and the skeletons from a later period. The bones could have been buried 400 years later in layers VI and VII.

Troy VII is the one archaeologists think is Homeric Troy. It was destroyed by war, whereas Troy VI seems to have been destroyed by an earthquake and no human remains have ever been found there.