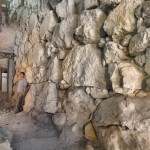 Archaeologists digging in the oldest part of Jerusalem have uncovered a 79-foot-wide wall dating back to the 17th c. BC. That’s back in the Bronze Age, when it was a small, heavily fortified Canaanite town known today as the City of David.

The 26-foot-high wall seems to have been part of a passageway from the City of David to the sole source of water in the area, the Siloam Spring, so it was vitally important that it be secure.

No fortifications of this size have ever before been discovered from the time of the First Temple, considered the zenith of Jerusalem’s development in the biblical period. The next period of such massive construction would not be for another 1,700 years, during the time of King Herod in the Roman period.

The Canaanite walls the archaeologists discovered are about two meters apart, rise to a height of some eight meters in some places and are made of gigantic stones, three to four meters thick. About 24 meters have been exposed, but excavators say this is only one-third of their original length.

A small portion of the wall was first discovered in 1909, but nobody had any idea of how massive it was. Now that this 79-foot section has been found, archaeologists hope that there is a great deal more still to be uncovered.

The wall is open to the public starting today.