Archaeologists excavating the amazingly rich Neolithic site of Çatalhöyük in Turkey have found a stone figurine of a reclining male with a luxuriant beard. He’s got a prodigious nose too.

Isn’t he handsome? I heart him way better than the putative mother goddess figurines they keep finding in caves, and have, in fact, found in Çatalhöyük as well.

Çatalhöyük is a complex of richly decorated structures, living areas next to cooking areas on top of burials. I just heard about it today from this story, but browsing the website I can’t believe how damn fancy these Stone Age digs were.

Çatalhöyük was the final resting place of some of the world’s first farmers. Other figurines representing farmyard animals and people in sitting and standing positions have already been excavated at the site, which dates back to the dawn of farming some 9,000 years ago.

Archaeologists working on the site have discovered primitive houses with rooms decorated with vulture skulls, wild boar tusks and teeth from weasels and foxes. Some of the buildings are believed to have humans buried beneath them.

Look at the horns installed in the pediment of a wall: 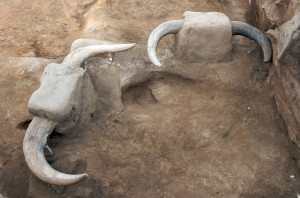 Southfork Ranch wishes it had steer horns on the wall anywhere near as cool as those.

Here’s a red wall I love: 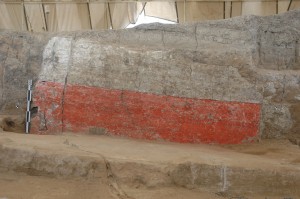 Always in style, a red wall.

The above pics are from Çatalhöyük’s gorgeous Flickr stream. It’s very much worth browsing, although it hasn’t been updated in 2009 so there’s nothing about the bearded man with the sheep nose.