The New York Public Library and the state of Pennsylvania announced Wednesday that they will both exhibit the library’s rarely-seen original copy of the Bill of Rights over the next six years. Beginning in the fall of 2014, the 225th anniversary of the drafting of the Bill of Rights, the document will spend equal time on display at the New York Public Library’s Stephen A. Schwarzman Building on Fifth Avenue and the National Constitution Center in Philadelphia. After the six years are up, the parchment will be on display at the library for at least 60% of the time, but Philadelphia will get custody the other 40% for the next 94 years.

This landmark agreement came about because there’s a good chance the NYPL’s copy was originally Pennsylvania’s. In 1789, after approving the first twelve potential amendments to the Constitution (two of them didn’t make it into the ratified version), Congress commissioned 14 original copies. They were all signed by Vice President John Adams, president of the Senate. One was kept in by the federal government and the rest sent to each of the 13 states to use during ratification deliberations. The federal government’s copy is on display at the National Archives and Records Administration, while most of the other copies are in the archives of their states.

The copies of four states are missing, however. Georgia, Maryland, New York, and Pennsylvania lost their copies somewhere along the road. Two unidentified copies survive, one in the Library of Congress, the other at the New York Public Library. The NYPL’s copy was donated by iron magnate John Stewart Kennedy (no relation to the later dynasty) in 1896. He had acquired it from Dr. Thomas Addis Emmet, a surgeon and collector of American history. 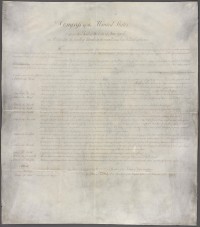 There have long been rumblings that Emmet may have somehow gotten his hands on Pennsylvania’s copy of the Bill of the Rights which went missing in the late 1800s. New York’s is thought to have been destroyed in a fire at the state archives. Although there is no proof of which state it once belonged to, the possibility that it’s Pennsylvania’s copy underpins this historic sharing agreement.

The document hasn’t been on public display in decades because of its delicate condition. It’s been very carefully preserved over the past century by experts at the NYPL’s Manuscripts and Archives Division and shown to visitors by appointment only. Display and travel will be made possible by a new high-tech encasement.

To ensure the document’s safety during display and while it travels, a special case will be constructed by the National Institute for Standards and Technology, based on technology developed for the Charters of Freedom at the National Archives. Estimated to cost $600,000, this crucial and state-of-the-art preservation measure is made possible as part of a generous gift from New York Public Library Trustee Ed Wachenheim III and his wife Sue.

It’s one of those nifty contraptions that replaces the oxygen inside the case with inert argon gas, reduces damaging light and stabilizes humidity. It’s basically a portable micro-environment ideal for preserving historic parchment.

The exhibits in Pennsylvania and New York will both be free of charge to all visitors.

“This is a win for Pennsylvania, New York and the citizens of the United States,” said Pennsylvania Governor Tom Corbett. “For the first time in decades, this historic document will be seen by We the People, the people who were granted these inalienable rights and privileges that we are still guided by today.”