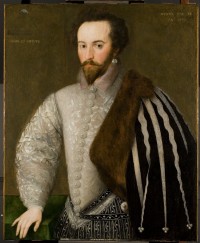 A portrait of Sir Walter Raleigh, explorer, soldier, poet and favored courtier of Queen Elizabeth I, in the National Portrait Gallery has an allegorical love note to the Queen hidden in the upper left corner. It’s just a few wavy lines of dark blue underneath the crescent moon, but they symbolize Raleigh’s devotion to Queen Elizabeth who is represented by the moon. Just as the moon controls the tides, the Queen controls her humble servant who is naturally content to be swayed by her irresistible influence.

The painting has been in the museum’s permanent collection since 1857, but the ocean waves had been overpainted so only the moon was visible. Conservators have worked to remove the overpainting and clean the portrait this year to make it ready for the Elizabeth I and Her People exhibition on display now through January 5th, 2014.

As obscure as it may seem to us, the image would have held immediate significance to Elizabeth, her court and the literati of the age. The association of Queen Elizabeth I with the moon was widespread at the time and Raleigh was a famous sailor whose first name is one letter away from water. Raleigh wrote a series of devotional poems to Cynthia, the goddess of the moon, from her devotee, the Ocean. Cynthia was a byname of Artemis, Greek goddess of the moon, hunt and virginity (among other things) who was born on Mount Cynthus. It also became a byname of Elizabeth, the Virgin Queen and an accomplished hunter in her own right.

Playwright Ben Jonson portrayed the Queen as the wise and virtuous Cynthia in Cynthia’s Revels (1600) and poet Edmund Spenser wrote Raleigh that he used his idea of Elizabeth as Cynthia to craft the character of Belphoebe in his masterpiece The Faerie Queen (1590).

In that Faery Queene I meane glory in my generall intention, but in my particular I conceive the most excellent and glorious person of our souveraine the Queene, and her kingdome in Faery land. And yet in some places els, I doe otherwise shadow her. For considering she beareth two persons, the one of a most royall Queene or Empresse, the other of a most vertuous and beautifull Lady, this latter part in some places I doe express in Belphoebe, fashioning her name according to your owne excellent conceipt of Cynthia, (Phoebe and Cynthia being both names of Diana.)

This portrait of Raleigh was painted in 1588, the year of the Spanish Armada, when Sir Walter was still in favor with the Queen before she threw him in the Tower of London for marrying her lady-in-waiting Beth Throckmorton in secret without seeking the monarch’s permission first. Even though he still had her favor, it was precarious enough that copious flattery and public mooning (get it?) over the Queen was very much de rigeur. It’s not just the moon and sea in the corner than marks the portrait as a devotional exercise. Raleigh’s pearl-festooned sunburst outfit clothes him in adoration for Queen Elizabeth.

Widely understood as a visual statement of Ralegh’s devotion to the Queen, he wears the Queen’s colours of black and white and his costume is covered with pearls, which were associated with Elizabeth as symbols of virginity. The pearls on his sable-trimmed cloak form the rays of a ‘sun in splendour’, a heraldic device also found in portraits of the Queen, possibly reinterpreted here as a ‘moon in splendour’.

Pearls are also associated with the moon because they look like her, and represent nobility, wealth and unblemished beauty. Queen Elizabeth wore huge quantities of pearls in her portraits, and here Sir Walter does the same. He didn’t just pick out his clothing for the portrait; patrons determined content during this period, which is how we know the moon over water imagery wasn’t some random doodling by the portrait painter.

Technical analysis of the portrait has also shown that the artist originally intended to show Ralegh with his right hand on his hip, instead of on the table. This evidence indicates that the picture was certainly devised as an original composition rather than from an existing portrait.

Dr Tarnya Cooper, Curator of Elizabeth I & Her People and Chief Curator, National Portrait Gallery, London, says: “We know it was the patron rather than the painter who would have helped to devise the content of portrait compositions at this time. Therefore this discovery provides exciting new evidence about Ralegh’s creative ingenuity. It shows how portraiture, like poetry was used as a tool to present personal messages of devotion to the queen.”