A Harvard undergraduate excavating the Moche archaeological site in San José de Moro, Peru, has unearthed a rare intact figurine. Second-year student Caroline Coolidge was digging in Peru as part of a summer archaeology program when she saw a little face peering up at her through the soil. Further excavation revealed an intact figurine in pristine condition, the first complete pottery artifact discovered this season.

The figurine dates to the transitional period between the decline of the Moche and the rise of the Lambayeque cultures in the area, about 1,000 years ago. 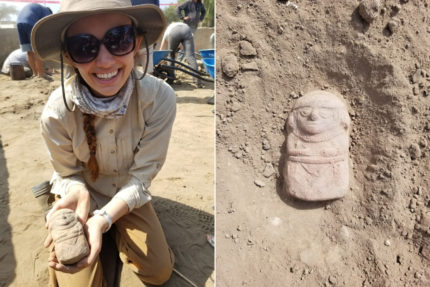 In addition to its pristine condition, what made Coolidge’s discovery so unusual was the absence of other objects nearby. “Typically, this type of artifact would be included in a burial,” she said, “but there were no burials found near it.” […]

Coolidge is eager to find out more about what her figurine might mean—archaeologists at the site suspect it may have been used as a fertility offering. [Harvard’s Dumbarton Oaks Professor of Pre-Columbian Studies Gary] Urton called it “an extraordinary piece” and “one of the most complete and beautiful figurines we have brought up from here in several years.” Coolidge plans to write about the artifact for her final class project and will study its composition and compare it with similar finds at the site in recent years, she said, to determine “its cultural significance and where it fits within the region’s chronology.”

Her exciting find on the five-week program, run by Pontifícia Universidad Católica del Perú in collaboration with the Harvard Summer School Study Abroad Program, has so inspired Coolidge that she has changed her planned course of study at the university. She will now either concentrate in archaeology or make it a “secondary field of study.” Is that what we called a minor in my day? It should be a second major at least, imho, given what a cool head start she got this summer.

Scholars from the Institute for Medieval Research of the Austrian Academy of Sciences (OeAW) have discovered a fragment from a German medieval poem about the adventures of a virgin and her anthropomorphised vagina that is almost 200 years older than any other known version of this eroto-satirical epic. Christine Glaßner discovered the fragment in the binding of a codex held in the library of Melk Abbey, an imposing baroque structure overlooking the Danube in Austria’s Wachau Valley. It was nestled between pages 204 and 205 of the codex.

The strip is long and skinny, 22cm by 1.5cm (8.7″x .6″), with just a few letters from 60 verses of  the poem. It was reused for its parchment in the binding of a Latin text. She recognized it as something of particular interest and Nathanael Busch from the University of Siegen identified it as a fragment from Der Rosendorn (The Rose Thorn).

The so-called “Rosendorn” (The Rose Thorn) tells of a virgin woman disagreeing with her talking vulva about which of them is most appreciated by men. Until now, it had been assumed that such openness regarding sexuality in the German-speaking world did not appear until the end of the Middle Ages, for example in the urban culture of the 15th century. The find from Melk, on the other hand, was written around 1300 and thus revises the previous research. It seems that 200 years earlier than previously thought, erotic poetry was written, recited and perhaps even staged. Apparently, such poems were rarely written down and have even more rarely survived to the present day.

Previously known from two extant copies, in the Dresden Codex and the Karlsruhe Codex, dating to the 16th century, Der Rosendorn was written by an unknown German-language author. It tells the saucy tale of a virgin and her vulva arguing over which of them is most appealing to men. The virgin argues her beauty is the draw. Her vulva argues that beauty doesn’t matter because she’s the one who provides all the pleasure. They decide to break up and prove once and for all which one of them is right. The vulva splits off by ingesting a “manic root” (symbolizing penetrative masturbation) and goes on her way. The separation is a disaster. The vulva is uncaringly used by every man she encounters; the virgin offers herself to a mob of men who trample her in their rush. In the end, they decide to become one once more. The narrator, a man who spied upon them from the beginning, is the one who reattaches them and he does so in the most obvious way you can imagine: he, uh, fornicates the vulva back into the woman.

The motif of a sentient vulva taking corporeal form independent of the woman she was once part of is seen in French and German medieval literature, a satirical counterpoint to the courtly romances of the period. The rose in the title is a symbol of female sexuality, and the initial setting of the poem — a walled garden where a virgin extracts rosewater from a rose bush and bathes in it — mirrors that of the 13th century masterpiece of courtly love literature, Le Roman de la Rose.

In March of this year, the fragment was carefully removed from the codex binding and is now preserved on its own in the fragment collection of the Melk Abbey Library. It is being studied now as part of the “Manuscript Census” of the Academy of Sciences and Literature Mainz at the Philipps University of Marburg.

An iron stylus inscribed with a quip reminiscent of many a hokey souvenir t-shirt has been found in central London. One of thousands of exceptional Roman treasures unearthed during the Museum of London Archaeology excavation of Bloomberg’s future European headquarters, the inscription makes this stylus unique. Inscribed Roman styluses are extremely rare finds anywhere in the empire, and the length and wit of this one makes it a stand-out piece.

The pens were used to write on wax-coated wooden tablets, more than 400 of which were discovered at the Bloomberg dig, extremely rare survivals that were preserved in the waterlogged soil of the lost Walbrook river.  MOLA archaeologists also found more than 200 styluses in that same excavation, and only this one had an inscription.

When it was first discovered during the 2010-2014 excavation, corrosion obscured the inscription making it illegible. The fact that it could be recovered at all is a tribute to the Walbrook’s powers of preservation. For years MOLA conservators have worked painstakingly to bring its clever wording back. Epigrapher Dr. Roger Tomlin was able to decipher and translate the tiny lettering:

‘I have come from the City. I bring you a welcome gift
with a sharp point that you may remember me.
I ask, if fortune allowed, that I might be able (to give)
as generously as the way is long (and) as my purse is empty.’

In other words: the stylus is a gift to remind the recipient of its sender; the sender acknowledges that it is a cheap gift and wishes that they could have given more. 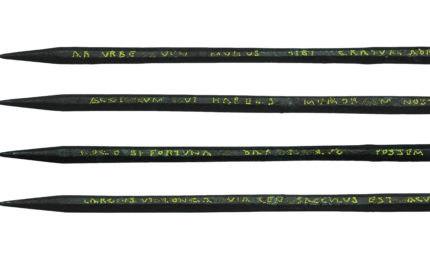 The stylus dates to around 70 A.D., when Londinium was a thriving commercial and administrative center. The inscription is a glimpse into the links connecting people even at the outer edges of the empire with the Caput Mundi.

The conserved stylus is going on display for the first time at the Ashmolean Museum’s Last Supper in Pompeii exhibition.

Just a quick link today because I’m travelling. Museum Crush (which is consistently awesome and you should read regularly) has an excellent article about the unique Iron Age warrior grave found in West Sussex in 2008. It’s full of details about the discovery from one of the archaeologists on the scene and has the best photographs I’ve seen.

NO I AM NOT JEALOUS. Okay yes I’m totally jealous.

The search is on for the legal owner of an exceptional collection of coins found in a cellar in Hungary that was buried by someone who almost certainly died in the Holocaust. The coins were found in the town of Keszthely 120 miles southwest of Budapest this February when the current homeowners were digging a hole in a cellar. They dug out five glass jars, each filled with coins and carefully sealed. The jars held 2,800 gold and silver coins from all over the world ranging in date from antiquity to the 20th century.

Almost half of the coins are from Pannonia, which was a province of the Roman Empire that covers modern-day western Hungary, according to Ferenc Redo, an archaeologist and coin expert.

The others are mostly antique coins from around the world, including pre- and post-revolutionary France, 19th century German territories, and both Tsarist- and Soviet-era Russia.

Many are from even farther afield, including South America, Africa, Asia and British-ruled India.

The house where the collection was found was in the ghetto in 1944 and given the presence of early 20th century coins, it’s almost certain they were buried by their Jewish owners in the desperate hope they might return to reclaim them at the end of the war.

The homeowners turned the coins in and they are now in the custody of Keszthely’s Balatoni Museum. There was also some jewelry stashed with the coins, some engraved. The engraving provides a key clue to the possible identity of the collection’s owners: the Pollak family, successful traders who lived in Keszthely before World War II.

The Holocaust struck like a whirlwind in Hungary. Even though Hungary had passed draconian anti-Jewish laws for decades (it was the first European country to do so after World War I), the government resisted Nazi pressure to expel/deport/murder its Jewish citizens on the grounds that the “Jewish problem” would be better solved by slaughtering them after the war was over, because their labour and skills were needed during the war.

That’s how Hungarian Jews managed to survive most of the war without being destroyed. Ghettoized, entrained, marked and immiserated, most assuredly, but still alive. As late of the spring of 1944, there were 800,000 Jews in Hungary, one of the largest extant Jewish communities in Europe at that time.

That changed in March 1944, when German forces occupied Hungary. The tides of war had turned against Germany and the Hungarian government was actively making peace overtures to the Allies. Hitler wasn’t having that, so the relatively hands-off alliance ended and occupation began.

Adolf Eichmann came in and did his monstrous thing. With the sickening efficiency that had become his trademark, he divided the country into six zones and emptied each in turn of its Jews. Deportations began on May 15th. Between then and July 8th, 440,000 Jews were sent to concentration camps, mostly Auschwitz.  Three thousand people a day, every day for six weeks, arrived on cattle cars at Auschwitz, 90% of them killed on arrival. The influx was so great that the crematoria could not keep up.

According to the 1941 Hungarian census, there were 755 Jews in Keszthely, about 6% of the town’s total population. On May 15th, 1944, 768 Jews from 319 families were locked into the ghetto, a few blocks centered around the town’s handsome 19th century neoclassical synagogue. On June 20th, 719 of the Jews (the rest used for slave labour) were moved to the Zalaegerszeg ghetto, then to Auschwitz. Twenty-two members of the Pollak family, five of them children, were among them. By the time the deportations ended in July, 829 Jews had been deported from Keszthely. When the war was over, only 64 of them had survived. Today just a dozen Jews live in Keszthely.

The museum plans to digitalise the collection and enlist archivists and historians to scour the Pollak family tree in search of descendants.

If no owner can be found, the collection will revert to ownership by the state.

“We also hope the exhibition will spread the word about the coins, and that a legal owner will turn up,” Havasi said.