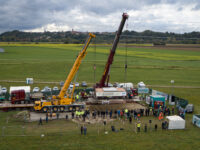 Archaeologists have discovered a large chamber grave from the 6th century B.C. near the Iron Age Heuneburg hillfort outside Herbertingen, southern Germany. The wooden chamber grave was at the center of an early Celtic burial mound which archaeologists have been exploring since last year. A targeted excavation unearthed the wood of the burial chamber and within in, some luxurious grave goods — an amber brooch, ribbed tubular gold beads. One bronze piece found with wood fragments still attached may have been part of a chariot.

The team also found the partially-preserved remains of organic materials which aren’t as shiny as gold jewels, but are of immense archaeological significance and extremely fragile. Several years of drought have already damaged these treasures which have survived the millennia in the waterlogged soil of the Danube plain.

To prevent further rapid deterioration of the organic remains, including the timbers of the chamber and other wood pieces that may have been part of a cart or chariot , and excavate the contents of the grave in controlled conditions, the entire burial was removed en bloc. The giant soil block weighs 80 tons and is 26 by 20 feet in dimensions. It needed two cranes to raise it for transport to the State Office for Monument Preservation laboratory in Stuttgart.

Another large chamber grave from the 6th century B.C. was discovered in 2010 only 320 or so feet from away from this site. It too was removed en bloc (almost exactly the same size a block — 80 tons, 25 by 20 feet) for laboratory excavation and was found to have belonged to an elite Celtic woman who has been dubbed the Princess of Bettelbühl. She was buried with very similar objects — an amber brooch and virtually identical ribbed tubular gold beads.

This results in a variety of questions for archaeologists that will be answered in the coming years. “We want to find out who these splendidly buried people are and how they related to each other. We assume that they are closely related members of the politically leading families who lived around 600 BC. Were in charge of the Heuneburg,” says project manager and regional archaeologist Prof. Dr. Krausse. 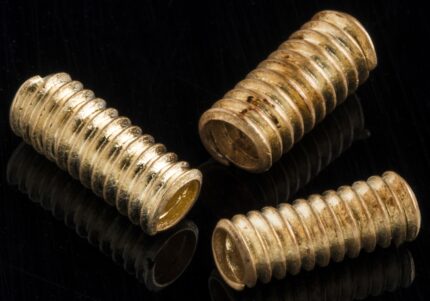