Notre Dame’s great pipe organ, the largest in France, has been dismantled piece by piece and removed for restoration. The organ was fortunately untouched by the flames that devastated the cathedral in April of 2019 and the ocean of water used to extinguish them, but the consequences of the fire left it in dire need of cleaning and repair.

The organ was coated in 460 tons of toxic lead dust that fell from the roof tiles and the cathedral’s spire during the fire. It has also suffered under the assault of the elements since the roof was destroyed. Variations in temperature — the heat from the blaze as well as the heatwave that cooked France that summer, a cold winter — also damaged some of the organ’s 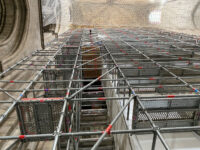 parts. The complex treatments necessary could not be performed in situ, and even the first step was incredibly complicated: the erection of scaffolding 100 feet high. Once it was up, the five keyboards were removed first, followed by the painstaking dismantling of 7,952 metal and wooden pipes and 115 stops. It took four months to take them all down, pack them in waterproof crates and warehouse them.

The plan is for work to be completed by April 16, 2024, five years after fire broke out and just in time for the reopening of Notre Dame before the Paris Olympics, but that’s an optimistic projection as clearing out the debris from the fire has taken so long that reconstruction hasn’t begun yet. Conservation 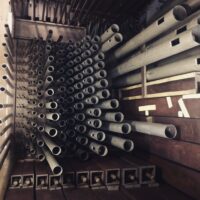 of the organ won’t begin until the middle of next year at the earliest. The government will call for bids for the cleaning, restoration and reassembly in the first half of 2021. Then the bids have be sifted through and accepted before work can start. Even when it is finally reassembled in the cathedral, tuning and harmonizing the organ will take six months.

The organ was originally built between 1730 and 1738, but today only the façade of that instrument survives in its original configuration. It was extensively altered, updated and expanded in the 1860s by innovative organ builder and inventor Aristide Cavaillé-Coll who built a new organ using some of the pipes from its predecessor. The quality of the organ and the acoustics of the soaring cathedral space have made it beloved by organists. Before the fire, anyone who wanted to was allowed to play the Notre Dame organ on Sundays, and there was a waiting list a mile long to get one of those coveted spots on the bench.

Here’s a phenomenal performance by Olivier Latry, one of Notre Dame’s four official organists, playing Johann Sebastian Bach’s Toccata and Fugue in D minor. This was the last recital recorded before the fire last year.