An exquisitely modeled marble skull sculpted by Gian Lorenzo Bernini for Pope Alexander VII in 1655 has been rediscovered in the Dresden State Art Collections. It was by no means hidden. It was on display, in fact, at Schloss Pillnitz palace south of Dresden when curator Claudia Kryza-Gersch spotted it while scouting items for a future Caravaggio exhibition. Several of Caravaggio’s paintings feature skulls (three St. Jeromes and two St. Francises, that I can think of), so she had the marble piece brought to the Dresden State Art Collections’ restoration laboratory for examination and conservation.

The life-size skull is made of white Carrara marble and is anatomically correct in minute detail from cranial sutures to the blade-thin nasal septum. Even the interior has been hollowed out and finished to full realism. Kryza-Gersch and the team of conservators at the workshop realized upon examination that this was an exceptionally high-quality piece. All they knew about it was that it came from Rome.

She hit the archives to find out more about its background and discovered that the skull had been acquired in 1728 from the noble Roman Chigi family by Friedrich August I of Saxony, aka Augustus the Strong, Elector of Saxony, King of Poland and Grand Duke of Lithuania. Most of the 168 objects acquired in the sale were ancient sculptures. Only four of them, including the skull, were Baroque. The skull stayed in the archaeological collection out of sheer inertia. Curators of Augustus’ collection and later of the state collection were focused on the antiquities and had no interest in the more contemporary sculptures.

Then Kryza-Gersch made a eureka-level discovery: in correspondence from Baron Raymond Le Plat, Augustus’ art buyer, right before the Chigi sale went through, Le Plat referred to one of the four modern works as “a famous death head, work of Cavalier Bernini.” Further research through the Chigi archives and Bernini scholarship explained the full background of the piece. It was commissioned by Pope Alexander VII, né Fabio Chigi, on April 10th, 1655, just three days after his election as pope. He summoned Bernini to a private audience where he commissioned the sculptor to make him a lead sarcophagus to keep under the papal bed and a marble skull to keep on his desk. 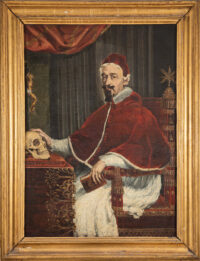 The sleeping-over-a-coffin thing may have been a tad on the extra side, but keeping reminders of the impermanence and fragility of mortal life was not uncommon at the time. The memento mori was a very widespread theme in art, décor and jewelry. In fact, Bernini’s skull served double-duty when it appeared in a memento mori portrait of Alexander VII by Guido Ubaldo Abbatini, a student of Bernini’s, that is now in the collection of the Sovereign Military Order of Malta.

The portrait joins the newly-rediscovered skull in the new exhibition, Bernini, the Pope and Death.

The exhibition examines both the plague of Rome in 1656/57 and the pieces jointly created by Bernini and Alexander VII, who are rightly regarded as a “dream team” of the baroque era. In an attempt to provide as broad a context as possible for the skull, other parts of the presentation are dedicated to the Chigi family as promoters and collectors of art, to the rivalry between Bernini and Francesco Mochi, and to Bernini’s influence on the works of Balthasar Permoser, the court sculptor working in Dresden at the time.

Bernini, the Pope and Death runs at the Semperbau in Dresden until September 5th. You can take an online virtual tour of the exhibition led by  Claudia Kryza-Gersch which is being offered free of charge on several Wednesdays and Thursdays in June.