The Rijksmuseum has acquired a unique display cabinet made in 1632 by Dutch furniture master Herman Doomer. Inlaid with ebony and mother-of-pearl, the cabinet is a masterpiece of Baroque innovation, and the only cabinet by Doomer than can be precisely dated. 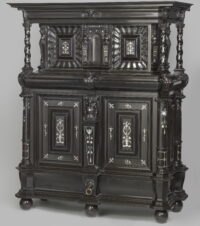 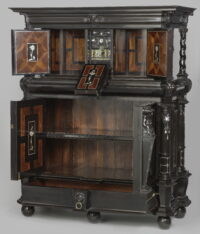 It is a cabinet of curiosities, meant to showcase the owner’s most prized possessions and collectibles, and Doomer had all the motivation in the world to create a masterpiece because the collection it housed was his own. Herman Doomer (ca. 1595-1650) was the premier cabinet-maker of the period and made a very good living for himself. He made so many frames for Rembrandt that they became close friends (and mutual clients; Rembrandt painted a portrait of Doomer and his wife Baertje in 1640). He owned several homes and was an avid collector, using the elaborate curiosity cabinets he had made to house his treasures.

Doomer was born in Germany and moved to Amsterdam in 1613 where he built a successful furniture-making business. He specialized in working with ebony, a rare, expensive and dense hard wood that was very much in demand in Europe as an ornamental wood for furnishings and decorative arts. The prized wood had become easier to buy in Amsterdam when the Dutch East India Company took possession of Mauritius in 1621, a then-uninhabited island in the Indian Ocean, and carved itself out an extremely lucrative monopoly exploiting the island’s enormous ebony forests. Mauritius ebony was the darkest, hardest and most compact ebony to be had, qualities that made it particularly spectacular for intricate carving and low reliefs. Doomer took full advantage of these properties, creating furniture rich with architectural motifs, dynamic movement, precision, depth and high polish.

The newly acquired cabinet shows how Doomer was looking for a new style. The lower part is still quite traditional, but in the upper part the furniture maker introduces movement and baroque innovation, such as fan shapes and twisted columns. The case is inlaid in precious ebony and radiant mother-of-pearl. That was also completely new in Amsterdam. The other cupboard in the Rijksmuseum was made a few years later: the baroque has fully penetrated there and Doomer introduces lobe elements.

The inside of the cabinet from 1632 is richly decorated. Five mother-of-pearl plaques are inlaid here. These are signed by another well-known Amsterdam artist: the mother-of-pearl worker Jean Bellequin.

The cabinet was in need of extensive treatment by Rijksmuseum conservators when it arrived. Furniture restorers had to reconstruct some of the mother-of-pearl inlay that had been lost over the centuries, and areas of detached ebony veneer had to be re-glued.

The monumental cabinet is being exhibited alongside a later display cabinet by Doomer which has been at the Rijksmuseum nearly 50 years. The exhibition runs through March 14th. Because the newly-acquired cabinet is fragile, it is only being opened for visitors to see the glorious interior two more times: February 2nd and March 2nd at 4PM.