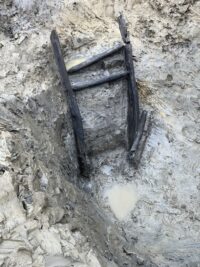 Rare well-preserved wood artifacts from an Iron Age (800 B.C.- 43 A.D.) settlement have been discovered at the site of highway expansion in Bedfordshire, England. Archaeologists unearthed an intact wooden ladder and a panel of wattle while excavating the route of the planned A428 highway. The wooden objects date to the Late Iron Age, approximately 2,000 years ago.

Museum of London Archaeology (MOLA) experts have been excavating a field near Tempsford where an ancient farm was in use from the Middle Iron Age (ca. 300-100 B.C.) through the late Roman period (200-400 A.D.). The pre-Roman occupation farm featured two large roundhouses. They are 15-20 meters (50-65 feet) in diameter, much larger than the typical roundhouse. Multiple loom weights were found inside the roundhouses, indicating fabric production took place at the site. Because so many weights were found, it’s possible fabric was being produced for trade to neighboring settlements.

Usually all that remains of roundhouses are postholes — the lacunae left in the soil after the wood rotted away. The postholes from this settlement are how archaeologists were able to estimate the size of the roundhouses. The posts themselves did not survive, but the anaerobic waterlogged soil of this boggy valley has kept some other wood elements from decomposing for two millennia.

The wooden ladder was found leaning against the side of a shallow well near one of the roundhouses. Archaeologists believe people descended the ladder to fetch water from the bottom of the well. It was left in the well, propped up in place, and was preserved thanks to being submerged in water and mud.

The well is also the source of the wattle panel. The panel is circular made of interwoven twigs and branches. It was used to line the wall of the shallow well to keep it from collapse. Wattle is the same material used to construct roundhouse walls. The woven panels would then be covered with daub, a coating material made of mud, clay and/or animal dung mixed crushed stone, straw and/or animal hair. Once applied to the wattle, the daub dried to form a firm wall.

The preserved wood artifacts have been recovered from the site and are now undergoing conservation. They are being kept wet to keep them from shrinking and will be dried out carefully in a laboratory in a way that prevents the cells of the wood from collapsing and shrinking and ensures the wood won’t rapidly decompose from exposure to air and microorganisms.

We can learn a lot from these wooden objects. As well as being able to see how people made and used them during their daily lives, finding out what type of wood they used will tell us about the trees which grew in the area. This can help us reconstruct how the landscape would have looked at the time, and how that landscape changed throughout history.

It isn’t just wood which can be preserved in these wet environments! We also find insects, seeds and pollen. These all help our environmental archaeologists build up a picture of how the landscape of Bedfordshire and Cambridgeshire looked 2000 years ago. Looking at pollen and plants preserved in the water, they have already identified some of the plants which were growing nearby, including buttercups and rushes!