The ancient bronze statue of a Winged Victory that has become a symbol of the city of Brescia in Lombardy, northern Italy, has returned to its original home, the city’s 1st century Capitoline Temple. It has been installed in the eastern cell of the Capitolium in a new layout that incorporates the iconic bronze (and several of its brethren) into its monumental surroundings.

Brescia’s earliest antecedents go back to 1,200 B.C. with a settlement of the ancient Italic Ligures. In the 7th century, Celtic Cenomani crossed the Alps and made the town in the foothills their capital. Unlike neighboring tribes, the Cenomani were allies of Rome and consistently sided with them against all enemies foreign (Carthage) and domestic (the Insubres). When the Insubres and other Gallic peoples in northern Italy joined together to march on Rome in 225 B.C., the Cenomani fought with the Roman Republic and its central Italian allies against their Celtic kindred.

It maintained its allegiance in the Social Wars of the 1st century B.C. when the Italic peoples rebelled against Rome. In reward, Brescia, then known as Brixia, was given civitas (“city”) status in 89 B.C. and 50 years later, its residents were granted full Roman citizenship by Julius Caesar. To celebrate the granting of Latin Rights, a sanctuary was built on the city’s main thoroughfare. Four large rectangular halls, each with its own entrance via a pronaos (columned portico) were built and decorated with vivid frescoes and inlaid wall. The exquisite workmanship is characteristic of high-end craftsmen from central Italy. Brixia wanted only the best to show off its official acceptance into Rome’s legal and cultural fold.

The Republican shrine lasted less than a century. Brixia supported Vespasian when he vied for the throne during the Year of Four Emperors (69 A.D.), and after he was victorious he had a new temple to the Capitoline Triad (Jupiter, Juno, Minerva) constructed over the Republican shrine. The bronze Winged Victory dates to this reconstruction.

She was beloved by the people of Brixia and we know this because they removed her and concealed her for her safety, likely in the late 4th or early 5th century. Eastern Emperor Theodosius I (r. 379-395) had taken decisive action to suppress paganism and many temples were destroyed in the process. Then came the invasions. Alaric devastated Brixia in 402. Atilla’s Huns sacked it even harder 50 years later. Somewhere in all this devastation, the people of Brixia collected its greatest bronze treasures — Winged Victory, six imperial portrait busts, at least three of them gilded, an incredible rare horse breastplate from an equestrian statue — and a pile of bronze frames, rings and fragments and stashed them in a cavity between the western wall of the temple and Cidneo Hill behind it.

The gods must have been looking out for their devotional art, because the treasure was submerged by a landslide that also covered the temple itself. The bronzes were kept safe under that landslide layer for centuries. They were rediscovered in 1826 in an excavation of the forum and Capitoline area. It was one of the largest and most significant collections of Roman bronzes ever found, and Winged Victory in particular captured the romantic imagination as a symbol of Italian patriotism in Brescia, then part of the Kingdom of Lombardy-Venetia, an Austrian vassal state established at the Congress of Vienna after the final defeat of Napoleon in 1815. 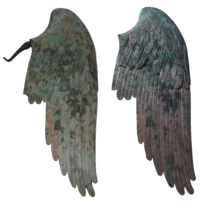 The bronzes find a permanent home in 1998 when the Santa Giulia Museum opened. In 2019, a new restoration of the Winged Victory was undertaken. Using the latest metal composition analysis, researchers discovered just how special she was. Originally experts believed the wings were added during the Vespasian era of construction to what had been a Hellenistic statue of Aphrodite, but the composition of the bronze confirmed that in fact all of the metal, wings, body and head, came from the same foundry at the same time. She was always a Winged Victory.

On Sunday the Santa Giulia Museum debuted its new Roman gallery, displaying its magnificent Roman cultural patrimony in a newly-designed, lit, accessible space that will give visitors a fresh understanding of ancient Brixia based on the latest research. The Winged Victory is now on display in the Capitolium next to the six portrait busts that were her roommates for 1500 years and with a second deposit of objects discovered in the excavation of the Capitoline Temple area.

Made of bronze using the technique of lost-wax casting and gilding only on the male ones, the portraits must have been inserted into stone or marble statues, as indicated by the careful finishing of the neck flaps. They were most likely displayed in a public space in the city and may have represented emperors or members of the imperial family. The features of the faces and hair allowed the figures to be identified with members of the Flavian dynasty and with emperors of the second and third centuries CE.

The other deposit, never shown in its entirety, includes a considerable amount of votive objects offered in the temple halls by worshippers during the life of this place of worship; these include rare engraved glass, such as the bottle with reproductions of views of cities of the Phlegraean area, jewelry, ritual objects, including the precious knife with a deer horn handle, simple and figured oil lamps, amphorae, large plates for ritual offerings, mold-decorated ceramics, and much more. […]

Other finds of particular value and interest include the bronze horse breastplate (balteo), a unique specimen throughout the empire, probably belonging to an equestrian statue displayed in one of the public spaces of ancient Brixia, on the surface of which numerous bronze figures have been applied, depicting Roman soldiers, with helmet and armor, and barbarians, with long hair, breeches and short cape, engaged in an access combat, and in the center stands out the figure of the emperor on horseback bursting among the soldiers.