New tombs have been discovered in the famed Neolithic necropolis in Pully,

near Lausanne on Lake Geneva. Archaeological investigations preceding utilities work on the Chemin de Verney unearthed eight cist tombs made of sandstone slabs in an area of about 110 square feet.

Pully’s Chemin de Chamblandes necropolis was first professionally excavated by Swiss archaeologist Albert Naef between 1901 and 1910. In use between 4300 and 3900 B.C., the necropolis is the largest group of Neolithic burials ever found in Switzerland. It is the type site for the cist tombs found throughout the Alpine arc in the Middle Neolithic. This style of tomb is now known as Chamblandes type after the Pully necropolis. 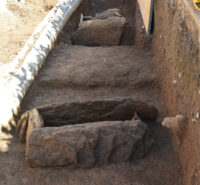 Chamblandes type tombs are rectangular stone boxes formed from four vertical slabs with a fifth slab on top of them. The deceased were laid to rest on their sides with their knees drawn up to their chests. Some of the graves include more than one burial. About 75 Chamblandes tombs containing the remains of about 100 individuals have been found since excavations began.

The newly-discovered tombs were found at a comparatively shallow depth and their cover slabs are in poor condition, broken into many fragments.

Two of the graves were found intact. The other six were damaged in recent city works. Only three of the tombs still contain skeletal remains, all three of them cranial elements. Archaeologists suspect some of the smaller cists may have been graves of children whose fragile bones have decomposed. The only grave goods found are some lignite beads.

The last discoveries in this district of Pully date back to 1984. These new burials offer a rare opportunity to complete the plan of the necropolis, which is still difficult to define given the absence of recent extensive excavations on this site.

The graves that are not endangered by the planned construction have been left in situ and covered for their protection. 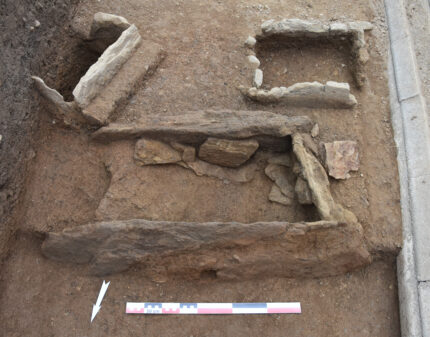