Archaeologists excavating the site of a Norman church in Stoke Mandeville, Buckinghamshire, have discovered two complete Roman busts and a head from a third one. Both of the complete busts were decapitated cleanly before deposition. One of them is of an adult female; the other of an adult male. The head found without torso is that of a child.

The team were investigating the site of St Mary’s, a church built in the 12th century, abandoned in the 19th and demolished in the 20th,  as part of the archaeological program of the High Speed 2 (HS2) railway project. They dug a circular trench to explore what they thought might be the foundations of an Anglo-Saxon tower predating the church and instead unearthed the busts. There were a smattering of Saxon artifacts — some pottery, a coin — in the ditch, but no construction. The Norman church was built directly over the walls and rubble from a Roman building.

They also found a Roman glass jug with a hexagonal base and body with a strap handle. While the jug is broken, it is in few larger pieces and

archaeologists believe they have recovered all of them, so careful restoration should be able to put it back together. It is so rare that there is only one other directly comparable piece, a blue-green hexagonal glass jug from the 1st-3rd century A.D. that is now in the Metropolitan Museum of Art. The Met’s example survived the millennia unbroken, which may serve as a useful guide to conservators working on the newly-discovered one.

As the dig at Stoke Mandeville comes to an end, the team working there have been able to piece together a more detailed analysis of the historic use of the site. The site appears to be a natural mound, which has then been deliberately covered with soil to create a taller mound. It is possible this may have formed a Bronze Age burial site. It appears this was then replaced by a square building which may have originated in the Roman period.

Archaeologists now believe the square building that pre-dates the Norman church is a Roman mausoleum. Roman materials found in the ditch around are too ornate and not enough in number to suggest the site was a domestic building.

The busts, glass jug and other artifacts recovered from the site will now be conserved and studied, with particular focus on finding any traces of the original polychrome paint that may have survived in the folds and creases of the busts. 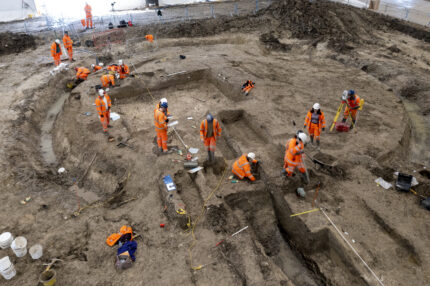