The bronze helmet found in the 7th century B.C. burial of an elite Piceni warrior in Corinaldo, Le Marche, central Italy, has been fully restored and is almost complete with just a few missing fragments.

The tomb was discovered in a 2018 excavation that revealed a necropolis of the Italic Piceni Culture. At least three large circular ring fitches dating to between the 6th and 8th centuries B.C. were unearthed. A pit inside the central ring ditch was filled to capacity with nearly 100 grave goods, including more than 100 ceramic vessels, an iron two-wheeled chariot, feasting andirons and skewers, bronze greaves and a bronze helmet. While no human remains had survived, the richness and content of the funerary furnishings mark it as the grave of a member of the Piceni aristocratic elite from the 7th century B.C.

One of the most significant objects was a bronze helmet. It was in pieces and squashed when it was discovered, requiring years of meticulous conservation. When a selection of 12 representative objects went on display in Corinaldo’s public art gallery in 2021, the helmet was still very much a work in progress. Only a few of the larger pieces were exhibited, mounted over a form to convey the helmet’s cap shape.

Professional restorers, professors and students of the University of Bologna’s conservation and restoration of cultural heritage graduate program in Ravenna collaborated to piece the rest of the helmet back together. It is a composite cap of the Fabriano variant composed of three laminae (bronze sheets) riveted together to form a base (brim and collar), the curved cap over the head and a central band running front to back. Two bronze points at the apex of the helmet once anchored a crest. The helmet was likely of local production, but made by Greek or Etruscan artisans who served the Piceni elite. 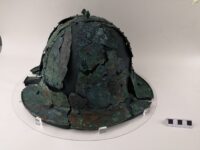 Due to public demand and to give the newly-restored helmet its due, the exhibition Rediscovered Treasure: The Prince of Corinaldo has been extended a year and will open to the public through January 31st, 2023.