The textile fragments woven with gold threads recovered from the paleochristian necropolis in Autun, France, have been meticulously cleaned to reveal new details about the pattern, weave and materials.

Fragments of gold threads and purple dye that had leached into the sediment were discovered in tombs 43 and 45 of the necropolis in 2020. Tomb 47 also contained gold threads visible in the half-foot of soil inside the lead sarcophagus. They were too fragile to excavate in situ, so archaeologists removed four large clods of soil for excavation and examination in laboratory conditions.

The gold textiles, especially the ones in Tomb 47, required long and expensive restoration. Private sponsorship funded an in-depth cleaning of 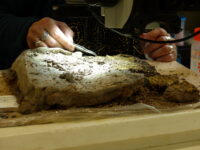 one of the four clods of Tomb 47. After two years, the job is not over — the full shape and outline of the fabric has yet to emerge — but the cleaning so far has revealed herringbone and floral weaving patterns. There are no yokes or seams found thus far. It appears this was a large single section of fabric, likely a shroud used to wrap the body of the deceased for burial.

Weaving this fabric required a high level of technical mastery. The gold threads are actually tiny strips of gold wound around a vegetable fiber 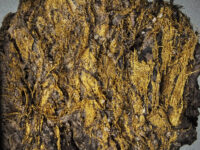 thread. The fiber core conferred elasticity to the gold metal strips spiraled around it, making it possible for the brittle metal to be woven instead of breaking apart. There are 100 gold threads per square centimeter (1.55 square inches), so imagine the kind of time and skill it must have taken to wrap so much gold around so many fibers.

The 2020 excavation revealed other unprecedented finds, including a set of 4th century carved amber pins unique on the archaeological record, and the exceptionally rare diatretic glass vase that is one of only 10 known in the world and the only one of them ever discovered in France. The diatretic glass vase and a varied spread of archaeological treasures from Autun’s early days as the capital of the Gallic Aedui people to the founding of the Roman city of Augustodunum by order of Augustus, the rise of Christianity in the 3rd century, the post-Roman decline and contraction through its revival as an urban and religious center in the Middle Ages. 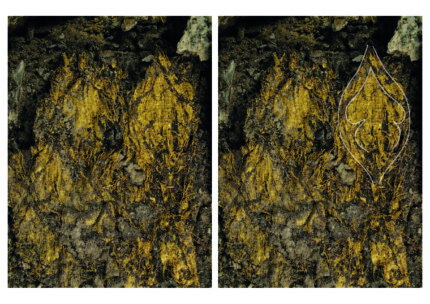