University of Alabama at Birmingham Egyptologist Sarah Parcak, Ph.D has discovered 17 still-buried pyramids using infra-red satellite imagery. Funded by a BBC grant, Parcak’s team spent over a year capturing images of Egyptian sites from both NASA and commercial satellites. The images revealed more than 1,000 tombs and 3,100 ancient settlements as well as the undiscovered pyramids. French archaeologists on the ground were then able to confirm two of the pyramids in Saqqara, the burial ground for the ancient capital of Memphis and the site where the oldest pyramids (from 2,600 B.C.) were found, and a home in Tanis which exactly matched the structures revealed by the satellite imagery.

Considering that there are only 140 confirmed pyramids in Egypt, finding 17 more is of major significance, and this is only the first pass covering areas that are just under the surface. Parcak and Zahi Hawass have plans to collaborate to train young Egyptians to capture images of ancient sites using satellite technology creating a whole new field of Egyptological study and revealing new sites that have been well buried by millennia of Nile silt deposits and shifting sands.

The infra-red imaging technology is so accurate it can capture objects less than 40 inches in diameter from satellites 430 miles (700 km) above the earth. It identifies differences in density, thus distinguishing dense mud brick walls, for instance, and the soil around them. That’s how the imagery can reveal not just large structures but also the road map of entire cities. Having such a map will be of immense help to archaeologists in planning where to excavate, and the satellites will train an unblinking eye on sites that are particularly vulnerable to looting because they are famous and/or because they are unexcavated and unguarded. 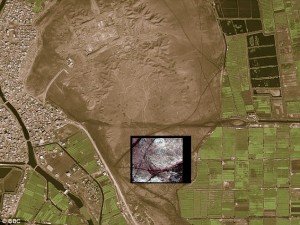 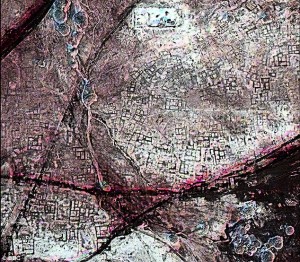 The Egyptian authorities plan to use the technology to help – among other things – protect the country’s antiquities in the future.

During the recent revolution, looters accessed some well-known archaeological sites.

“We can tell from the imagery a tomb was looted from a particular period of time and we can alert Interpol to watch out for antiquities from that time that may be offered for sale.”

Parcak’s work will be covered in detail in the BBC documentary Egypt’s Lost Cities airing Monday, May 30th. This show won’t air in the US, but the Discovery Channel is putting together a documentary of its own on Parcak’s findings which is tentatively planned to air some time this summer.

To tide you over until then, find out more about Tanis in a Secrets of the Dead episode on PBS called “The Silver Pharaoh.” I just saw it last week. It describes the discovery of the tomb of Pharaoh Psusennes I in Tanis by French archaeologist Pierre Montet. This was in 1939 so the spectacular find, including the only silver sarcophagus ever found in Egypt, got very little attention on account of the Nazis (I hate those guys).

Speaking of which, given the Tanis location and the French archaeologist, I couldn’t help but wonder if George Lucas might have been inspired by Montet’s discoveries. The documentary even gives a shout out to the Ark of the Covenant with a Biblical reference that could be interpreted as an Intermediate Period pharaoh sacking the Temple of Solomon and taking the Ark back to Egypt (at the 7:17 point in the video).

4 thoughts on “US Archaeologist finds 17 pyramids via satellite”