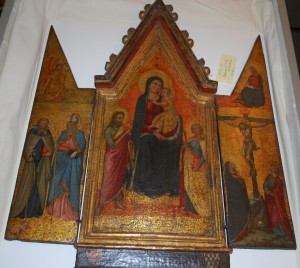 A 14th century triptych depicting the Virgin Mary that was stolen from a private home in Goito, Italy (southwest of Verona) during a burglary in 1971 has been found at the J.B. Speed Art Museum in Louisville, Kentucky. The Speed purchased it unwittingly from Newhouse Galleries, an Upper East Side New York art gallery, in 1973 for $38,000 and have agreed to return it to Italy.

Since then, it has gone on display at the museum off and on, most recently off. It hadn’t been exhibited in at least a decade when Homeland Security agents were alerted to its location by the Italian Ministry of Cultural Heritage in Rome a few months ago. The feds aren’t saying how exactly the painting was traced to the museum or how it got from Goito to New York in the first place, but once the authorities contacted the Speed they immediately cooperated with the investigation and helped confirm that their triptych was in fact the one stolen in 1971. Specialists compared the work to pictures of it in the Goito home and identified it based on unique markings.

The small (1.6 feet by 1.9 feet) tempera-on-wood altarpiece depicts the Virgin Mary with Christ child in the center panel, Saints John the Baptist and Catherine of Alexandria on the left panel, and the crucifixion of Christ and the annunciation on the right panel. It has been attributed to Florentine artist Jacopo del Casentino (b. 1297?, d. 1358), but there is still debate among art experts. Some people think it’s a 19th century work made in the style of a 14th century piece. Speed director Charles Venable isn’t convinced it’s Casentino’s, but the Italian authorities and the U.S. Attorney appear to be. 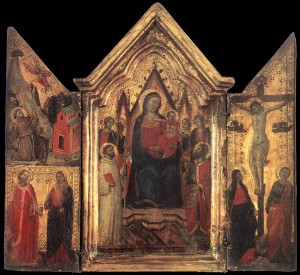 If it is Casentino’s work that’s a very big deal because right now the only other work known to exist by that artist is in the Uffizi Gallery of Florence. It’s another triptych of the Virgin Mary, in fact, called Madonna Enthroned with Angels and Saints.

The triptych was stolen from Lidia Bianchi Perdomini’s felicitously named home Villa La Giraffa (yes, that does mean Giraffe Villa) on October 2, 1971. Burglars cut through metal bars and a glass window, absconding with the triptych, paintings from the Venetian school and oils by realist painters Giovanni Fattori and Silvestro Lega, among others. The collective value of the stolen pieces was assessed at $33 million, and that was 40 years ago.

When the Speed bought it the piece was attributed to an unknown 14th century artist and given the small original sale price, the museum never bothered to insure the piece, not even for the $38,000 they spent on it, never mind for the millions it would be worth as a confirmed Casentino. They’re taking the hit, such that it is, with good cheer, though. Before they return the piece they will put it on display one more time in an exhibition called The Case of the Italian Altarpiece. The exhibit focuses on putting the painting in the context of the international art trade and will provide visitors with details on how the piece was researched and the history of ownership determined. It’s a neat idea that more museums who get busted with loot should emulate. The exhibit will be open from June 9th to sometime this summer (probably early July).

The Speed is a member of the Blue Star Museums program, a program that allows active duty military personnel and their immediate family members free admission to more than 1,300 participating museums in all 50 states between Memorial Day through Labor Day. If you’re a military family and in the area, take advantage of the opportunity. You can find other Blue Star Museums near you here.

After the final exhibit, as per the settlement drawn up between the U.S. Attorney’s Office and the Speed, the triptych will be returned to the Cultural Heritage Office of Mantova, Italy. Since the original owner is deceased, the Italian authorities will determine what happens next, if it will be returned to any of Perdomini’s heirs or put on public display.