Crews from the Cape Fear Community College and the University of North Carolina Wilmington recovered a 2,500- to 3,000-pound anchor from the wreckage of Blackbeard’s flagship the Queen Anne’s Revenge Friday. It’s 11 feet, 4 inches long with arms that are 7 feet, 7 inches wide, but believe it or not, that’s only the third largest anchor on the site. The ship had multiple anchors ranging from wee 160-pound grapnels like the one retrieved in October 2009 to emergency behemoths deployed during storms. This one was probably the ship’s everyday anchor.

The team originally planned to recover the second largest, which is 13 feet long with arms that are 8 feet across and weighs at least 3,000 pounds, on Thursday, only to encounter adverse weather that forced them to postpone the attempt for a day. They figured the larger one would be the easiest to retrieve since it’s on top of the ballast pile, but it was too deeply embedded in the objects used for ballast so they decided to go for the number three which was perched on the side. Given the configuration of the remaining parts of the ship, it’s likely that future dives will recover artifacts from the side of the ballast pile as well.

The only remaining parts of the ship — the wooden hull structure, ribs and a plank — are at the bottom of the pile, protected by ballast that kept the ship upright. Six cannon and three other anchors are also in the pile.

Wendy Welsh, field conservator and QAR lab manager, and archaeologist Chris Southerly dived in the Atlantic to hook up the anchor for its lift to the ocean surface. “It lifted great,” said Welsh, who has worked with the project for nine years. “I didn’t think I’d see this day so soon.”

Southerly compared the retrieval to the child’s game of Pick-Up-Sticks, where players toss plastic sticks on a hard surface and then remove them one at a time without disturbing the ones underneath. “It’s really satisfying that I’ve had privilege of seeing it,” he said.

The anchor is now in the North Carolina Maritime Museum artifact repository where it will undergo years of conservation. The small grapnel is two years into conservation and is still not display-ready. This much larger anchor with far more extensive concretion (the hardened concrete-like coating of ocean debris that forms around the leaching wrought iron) will require an estimated four years of painstaking attention before it’s stabilized.

The N.C. Maritime Museum in Beaufort is the official repository for all artifacts recovered from the Queen Anne’s Revenge. They’ve had a small exhibit dedicated to Blackbeard’s flagship, but on June 11th a new permanent exhibit opens to the public featuring a newly renovated 1200-square-foot space, a third of the space in the entire museum, to showcase as many of the 250,000 artifacts recovered from the wreck site as they can. 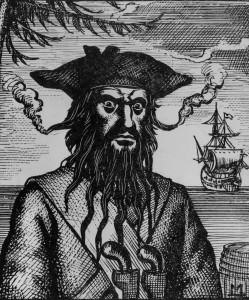 The Queen Anne’s Revenge ran aground off the coast of North Carolina in June 1718. The 300-ton British man-of-war was built in 1710. It was captured by the French in 1711, and they used it as a slaving vessel. It was captured again only by pirates this time in 1717. Pirate captain Benjamin Hornigold gave the ship to one of his crewmen, a certain Edward Teach or Thatch who would become famous under his nom-de-guerre, Blackbeard. He renamed it from La Concorde de Nantes to Queen Anne’s Revenge, packed it with cannon instead of slaves, and with it laid waste to British, Dutch, French and Portuguese shipping from west Africa to the Caribbean.

There’s some speculation that Blackbeard intentionally grounded the ship so he could thin out his crew and keep the lion’s share of booty once he accepted the pardon of North Carolina governor Charles Eden. Not that it would do him much good. Five months later, he had already gone back to piracy and was defeated and decapitated by Lieutenant Robert Maynard of the Royal Navy.

If you’d like to read more about the challenges and delights of the Queen Anne’s Revenge wreck, there’s an excellent article from a couple of months ago on the QAR salvage operations on the Smithsonian Magazine site. The Queen Anne’s Revenge recovery and conservation project has a website of its own very much worth perusing.

6 thoughts on “Another Blackbeard anchor retrieved from wreck”