Furniture restorer Clive Payne was repairing an early 18th century desk for a client who had purchased the piece at an estate held at Agatha Christie’s Devon home in 2006. The desk, made around 1710, is a quality piece with thick walnut veneers and three secret drawers but was in dire need of refurbishment. The anonymous owner commissioned Payne to restore the desk and several other pieces of furniture he had bought at the auction. After being in storage at Payne’s workshop for three years, the desk finally made it to the front of the line.

As part of the restoration, Payne removed the back of the desk and two pieces of paper fell out. One of them was a telegram sent by playwright Noel Coward to Agatha Christie in 1957.

Coward was living in Bermuda at the time after leaving the UK for tax reasons. He was inspired to send Christie a note when her murder mystery play The Mousetrap became the longest ever running play in the West End. Coward had set the previous record with his séance themed comedy Blithe Spirit which ran for 1,997 performances starting July 21, 1941. The Mousetrap debuted on the West End on November 25, 1952. It broke Coward’s record on September 13, 1957. In full sporting British style, Coward sent her a telegram of congratulations. 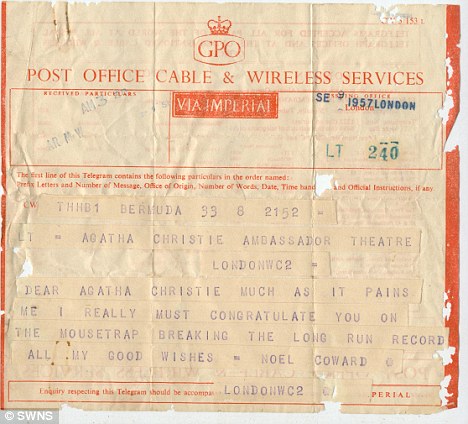 Dear Agatha Christie, much as it pains me I really must congratulate you on The Mousetrap breaking the long run record. All my good wishes, Noel Coward.

Little did he know how far behind The Mousetrap would leave that long run record. Fifty-four years later and the play has yet to stop its run. Christie herself had no concept that it would have such extraordinary longevity. In her autobiography she reports telling producer and theatrical impresario Peter Saunders that she expected the play to run no more than eight months.

The other piece of paper found along with the telegram was a receipt for underwear made out to a Mrs. Mallowan. Agatha Christie’s second husband was Max Mallowan, so the receipt for £24.13s.6d from a lingerie shop in London in 1952 was for Agatha’s own unmentionables, nighties and housecoats.