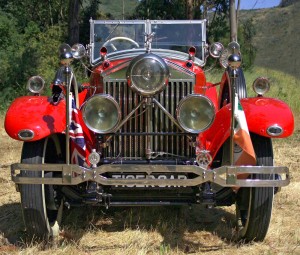 A Rolls Royce New Phantom Torpedo Sports Tourer custom-made in 1925 for Umed Singh II, Maharaja of Kotah, to hunt tigers with is going up for auction next week at Bonhams’ Quail Lodge Sale in California.

Tiger hunting had long been a favorite pastime of Indian rulers and although traditionally they rode luxuriously appointed elephants, some of the trendier aristocrats replaced pachyderm conveyance with a luxury motorcar decked out to the nines with both decorative and killing features.

The former include crocodile seats and what may well be the coolest horn of all time, a nickel-plated snake. The latter include a mountable Lentaka swivel cannon on the rear bumper (just in case the maharaja felt like killing any elephants while he was out and about), a double-barrelled high-caliber Howdah pistol intended to shoot any animal charging the car, two vertical racks in

the back seat containing a number of big game rifles, bird guns and shotguns, and just to ensure the tiger had no chance of survival whatsoever, a trailer-mounted Bira .450-caliber hand-cranked machine gun that attaches to a winch in the back of the car.

There are front and rear Stephen Grebel searchlights for finding and startling game while hunting at night, a red light that was only lit when the Maharaja was on board, and a blue light for when his wife was. It has tall tires and a transmission with a unique low gearing ratio that allowed the car to move through rough off-road jungle terrain. Not that there seemed to much in the way of off-road chasing involved.

“It was more for a show but everything would be ready and then they would then go and take this Rolls Royce up to a point or the hills and from there shoot the tiger that was already captured by their servants,” [Pran Nevile, a writer and expert on the British Raj] told Reuters.

Indiscriminate hunting, however, decimated India’s Bengal tiger population from an estimated 40,000 a century ago to about 1,700 today. Tigers are now a protected keystone species throughout Asia from Indonesia’s Sumatra to Indochina and India.

It wasn’t just the quadrupeds in danger. There’s a Chubb safe inside the car that the maharaja specifically commissioned to hold contingency money that would be given to the family members of any hunting assistants killed during a hunt.

The Tiger Car was in India until 1968 when it was sold to a British Rolls Royce expert. It’s gone through various hands since then and been restored twice, but still retains a remarkable number of its original bits and bobs, including an ammo box, two Thermoses and a complete tool kit. Bonhams estimates it will sell for between $750,000 and $1 million.