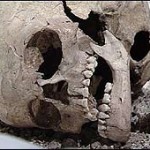 The prehistorican skeleton of a boy known as “Charlie” was discovered near the Avebury standing stones back in 1929. Since then it’s been studied and displayed at the Alexander Keiller museum.

Now the Council of British Druid Orders has asked for Charlie and several other similar human remains to be reinterred.

Rollo Maughfling, the archdruid of Stonehenge and Glastonbury, said: “Beyond all the other philosophical, scientific and religious arguments, in the end it comes down to something called common human decency.”

Fellow pagan Arthur Pendragon added: “These are human remains – you wouldn’t dig your grandmother up from a churchyard.”

Okay, first of all, major :rolleyes: @ “Arthur Pendragon”. You wish, buddeh. Secondly, archaeologists are not at all pleased that this petition is actually being taken seriously by English Heritage.

They think — correctly, I’m sure — that it would create a scary precedent. However, there is something of a parallel with Native American tribes in the US and Aborigines in Australia reclaiming the remains of their ancestors for reburial.

The difference here being that “Arthur Pendragon” is descended from “Charlie” only in a self-conscious, contrived way. He chooses to identify as a Druid, yes, but I’m not sure that entitles them to the same consideration as tribal authorities.

On the other hand, some of the controversies over remains in the States involve tribes that have no specific evidence that they are descended from the skeletons, so who’s to say, really.