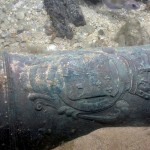 Odyssey Marine Exploration, the treasure-hunting company currently embroiled in a dispute with Spain over 17 tons of gold and silver it found on sunken galleon, has struck gold again, possibly literally, but definitely figuratively.

This time they have found what appears to be the 18th c. iteration of the HMS Victory. The predecessor of Admiral Nelson famous ship, this HMS Victory went down with all hands and four tons of gold during a storm in the English Channel in 1744.

In a secret operation over the course of many months, the US treasure-hunting company Odyssey Marine Exploration has managed to locate the sunken ship 100 meters (328 feet) below the surface of the English Channel. Following 23 dives made between May and October, 2008, there is now “no doubt” that the wreck is indeed the HMS Victory, according to the 46-page report detailing the successful search. […]

According to the report, the site covers an area of 16 by 21 meters (53 by 69 feet) in which 41 bronze cannon have been found, including eight enormous 42-pounders. Most of the cannon lie parallel to the ship’s keel after having been displaced by modern fishing nets. In addition to the cannon — and a layer of more modern refuse, including plastic bags, glass bottles and a video cassette — the team found other remnants from the 18th century, including a copper kettle, two anchors and the ship’s 10-meter-long rudder. By digging in the sand on the channel floor, Odyssey hopes that it can find the rest of the 100-110 cannon thought to have been aboard the ship.

Odyssey also hopes it can find the reported four tons of gold coin plus assorted treasure the captain pilfered off French merchant vessels.

The cannons alone are of major historical value. The Victory was the last large warship to be outfitted with bronze cannon. Cast iron replaced the bronze.

One thought on “Odyssey scores the Victory”