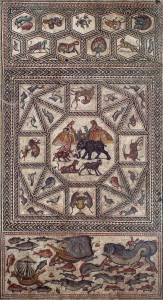 The 1700 year old, 600 square foot (180 square meter) masterpiece was first found in Lod, Israel, 13 years ago. It’s a riot of gorgeousness, full of colors, exotic animals, seafaring scenes, swirly decorative motifs, and it’s almost complete. There are just a couple of spots where the tesserae are missing.

Speaking of which, the mosaic is composed of 2 million of them. The style is similar to other mosaics found in northern Africa, so the OCD master who put this one together may or may not have been local.

The mosaic was first displayed for a single weekend back when it was found and 10,000 flocked to see it over those two days. The Israeli Antiquities Authority didn’t have the funds to properly conserve it however, so after that mere weekend of display, they covered it back up for its own protection.

Now thanks to a $2.5 million grant from the Leon Levy Foundation and collector Shelby White (if those names sound familiar it’s because they’ve been embroiled in the looting fiascos of recent years and have had to return all kinds of priceless artifacts to Italy and Greece), the Lod mosaic is once again revealed while archaeologists prepare it for transport and conservation.

They estimate the conservation will take 2 years, during which time they’ll ship a part of it to the Met for short-term exhibition. (Cynicism insert: how much you wanna bet that was a condition of the Levy-White grant. Shelby White is on the board of the Met as was her husband Leon Levy when he was alive.) Then the whole humpty dumpty will be put back together again onsite in Lod where a new museum will have been built to properly house it.

Not planing to be anywhere near Lod during that time? No problem, drill sergeant. Too easy. You can watch the live broadcast while juggling your bollocks in the comfort of your own home.