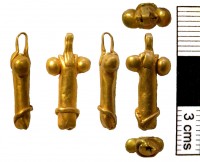 The Roman gold pendant in the shape of a phallus that was discovered in 2011 in Hillington, Norfolk, has become such a popular exhibit at the Lynn Museum that replicas will be sold at the gift shop. The small but proud gold member was unearthed by metal detectorist Kevin Hillier on January 30th, 2011, in a field belonging to farmer Neil Riseborough. Hillier reported it to the Portable Antiquities Scheme and at an inquest in April of 2011, Norfolk coroner William Armstrong declared it official treasure trove.

Experts at the British Museum assessed fair market value of the phallus at £800 ($1200). That sum, which technically is a finder’s fee rather than a sale price, is split between the finder and the landowner. Local museums have first dibs and although Lynn Museum has a budget even tinier than a two-centimeter phallus, they were able to raise the money with donations from the Friends of the King’s Lynn Museum (they contributed £80), and grants from the Victoria and Albert Museum Purchase Grant Fund (£400) and the Headley Trust (£320). In January 2012, the phallus went on display.

The figure is formed out of a sheet of gold soldered together along the length with an aperture at the ends and two globes of gold soldered to each side of the base. Between the testicular globes is a transverse loop that was soldered separately. The loop suggests the phallus was worn as a pendant, possibly by a Roman soldier since the use of phalluses as amulets to ward off evil spells was not a local religious practice. It’s a rare object as most of the other ancient phalluses discovered in Britain are made out of base metals. The gold is bright and the piece is in excellent condition.

The little artifact has captured the imagination of museum visitors like nothing else in its collection, so when last year the museum began looking into the possibility of creating souvenirs inspired by local objects, replica Hillington phalluses leaped to mind. The museum has commissioned artist Sue Heaser to create the souvenirs.

Mrs Heaser, who is also an archaeological illustrator, said: “This is the most extraordinary thing I have ever done. I love working with ancient jewellery and the craftsmanship involved here is amazing.”

The replicas will not be made out of shiny real gold, though, and it will be a solid piece rather than a hollow sheet seamed up at the side. Silver and bronze replica phalluses will be available in the gift shop within the next few months.

Retail manager Maria Wong said the museum was also looking at some of its other exhibits to replicate as souvenirs.

Miss Wong said: “This is a very exciting project. This is the first time we have reproduced from our own collection. The Hillington Phallus is a very popular exhibit at Lynn Museum.”

I think it’s a great idea and I love how cool they are about this. It’s very Roman, really, since they were entirely sanguine about nudity in general and phalluses in particular. Phalluses were everywhere in ancient Rome, so widespread a symbol that when stuffy 19th century curators at institutions like National Archaeological Museum in Naples and the British Museum had to deal with the mountains of penises in art, graffiti and consumer goods found at Roman sites, they locked them all up in secret rooms that only “men of good character” were allowed to enter.

Two hundred years later, I doubt a local museum in the US would be able to even contemplate such an addition to the gift shop without somebody starting a boycott or a letter-writing campaign to stop it from corrupting their children with its penisness. I doubt they’d be persuaded by the historical fact that Romans gave their children phallus amulets to keep them safe. Roman kids were bristling with phalluses.

14 thoughts on “Golden phallus so popular museum to sell replicas”